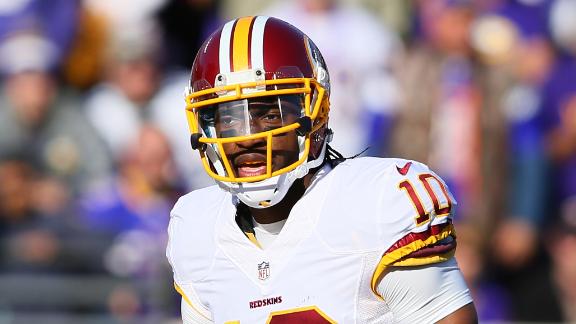 "There's no doubt there," Griffin said. "This is my team and I'm going to lead it."

On Monday, Gruden said the Redskins wanted to see how Griffin developed over the final seven weeks of the regular season. They'll have to decide in the spring whether to offer him a fifth-year extension.

But the coaching staff still wants to know what sort of player it has.

"That's what we have to find out," Gruden said.

The problem is that Griffin has played in only nine quarters for Gruden after missing seven games with a dislocated left ankle earlier this season. He started Sunday's 29-26 loss at Minnesota.

"What he's saying is, 'Coming into this year, everybody has got a clean slate. Everybody has to prove why they should be here,'" Griffin said. "And I haven't been out there. Availability is the key, so my job is to continue to go out there, get better each week, help this team win and the rest will take care of itself. I don't take that in any kind of way negatively."

And while Griffin understands that, he says he still hasn't lost any belief in what he can do -- now and in the future.

There was little doubt about his future in Washington during a 2012 rookie season in which he rushed for 815 yards and had a 102.5 passer rating. Since then, he's had to recover from knee surgery, fend off critics, deal with negative stories and re-prove himself on the field.

He completed 18 of 28 passes for 251 yards, a touchdown and an interception on Sunday. Griffin showed the ability to extend and make plays, but he also was sacked five times in part because he holds onto the ball a long time.

Still, he does not view the next seven games as an opportunity to show he can be the Redskins' franchise quarterback.

"I understand everybody has a criticism," Griffin said. "But you have to prove yourself every day in this league. I take that mindset toward it, but when it comes to being the franchise guy ... I believe that I am. I believe this organization knows that I am and I know those guys in the locker room believe that I am. I don't ever step onto the field trying to make a claim saying, 'I'm the guy.' No, it's not like that."