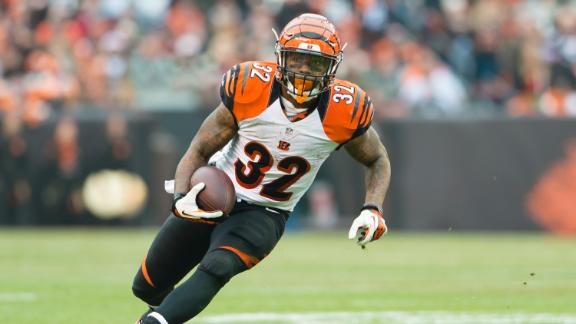 CINCINNATI -- Bengals coach Marvin Lewis is tired of having to answer questions about his team's inability to win a playoff game.

He's so tired of it that near the start of his Wednesday afternoon news conference, he had a testy exchange with reporters seeking his and his players' thoughts about the franchise's playoff-win drought that extends to the 1990 season.

"I told them not to answer your questions, to just tell you, 'That's not me. I had nothing to do with that,'" Lewis said, interrupting a question from ESPN's Bob Holtzman. "There you go."

Pressed about interrupting the question, Lewis said he was fed up with answering inquiries like it.

After laughter filled the room, Lewis continued, calling it a "very relevant question."

Pressed further, he said he was tired of the playoff-loss question because "it does zero" for us.

"We have to wait until Sunday to answer it again," Lewis said.

In addition to having not won a playoff game in 24 years, the Bengals are 0-5 in the postseason appearances they have had since Lewis became head coach in 2005. Despite making it to the playoffs for a franchise-record fourth straight year, the Bengals are trying to reverse course when they travel to Indianapolis this weekend and win their first playoff game with Andy Dalton as their starting quarterback.

"Regardless of what's gone on in the past, this is a new team," Dalton said, bucking Lewis' orders and answering a question about the previous postseason failures. "We're here again. We were able to earn our way back here. We've got to take advantage of that. We understand that."

Dalton's total postseason QBR has declined each year he's made the playoffs. The fourth-year signal-caller had a 25.1 QBR in the 2011 playoff loss at Houston. It was at 15.1 the next year, and 14.2 last year when the Bengals were bounced by San Diego in the wild-card round.

Asked how he would feel to finally win a playoff game, Dalton said, "it'd be big."

"That's what you want to do," he said. "You want to be playing well this time of year, but it's not about one win. That's the thing everybody's talking about. We need a win to get everybody to stop talking about, oh, we haven't had a win in the playoffs.

"That's not what we're playing for. We're not playing for one win. The ultimate goal is to win the Super Bowl."

The last time the Bengals appeared in the Super Bowl in January 1989, Dalton was a little over a year old.