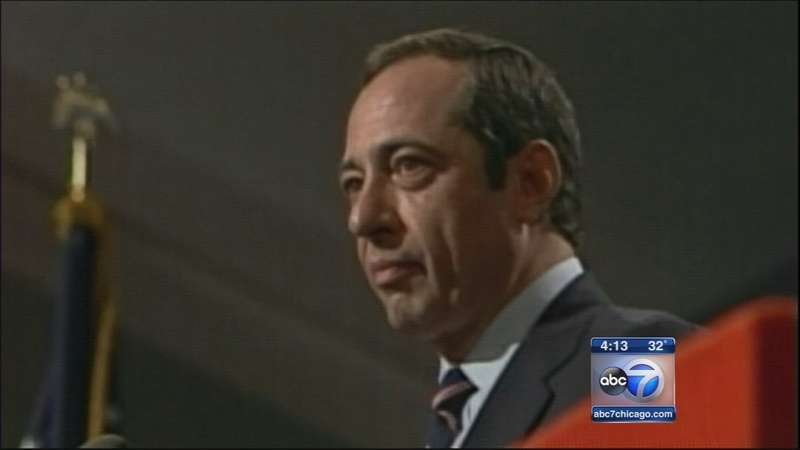 Cuomo served three terms as governor, from 1983 to 1994. He had recently been hospitalized for a month with a heart condition.

Cuomo's son Andrew was inaugurated Thursday for his second term as New York Governor. Mario Cuomo's last public appearance was Nov. 4th at the victory speech for his son's re-election.

They are the only father-son governors in New York history.

Mario Cuomo is survived his wife Matilda, 5 children and 14 grandchildren.

PHOTOS: Mario Cuomo through the years 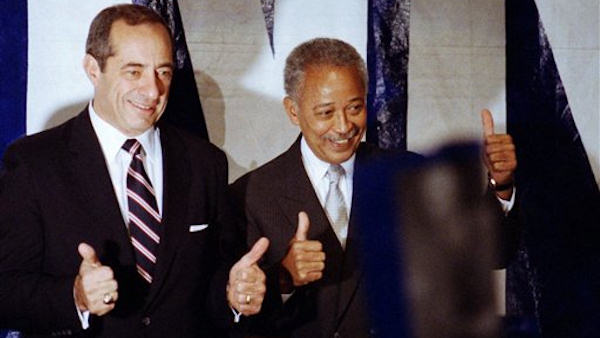 Former New York Governor George Pataki said, "Governor Cuomo was a proud son of immigrants and a compassionate leader who possessed a soaring intellect. He was a great New Yorker who will be missed."

Our country and our region lost a giant today with the passing of Governor Mario Cuomo.

Former U.S. Senator from New York Al D'Amato said, "He was a tremendous New Yorker and it was my privilege to work with him."

Cuomo, arguably the most gifted and powerful orator of his generation, delivered the keynote speech at the 1984 Democratic National Convention.

President Barack Obama said Cuomo, "rose to be chief executive of the state he loved, a determined champion of progressive values, and an unflinching voice for tolerance, inclusiveness, fairness, dignity, and opportunity. His own story taught him that as Americans, we are bound together as one people, and our country's success rests on the success of all of us, not just a fortunate few."

Cuomo hoisted the banner of liberalism during a time when conservatives, led by Ronald Reagan, were trying to turn liberal into a 4 letter word. Cuomo became the patron saint of liberals because he was an unabashed proponent of civil rights, a woman's right to choose, and putting people before corporate profits.

His speech at the 1984 Democratic Convention sparked a national following. But it was all sort of an accident, because what he wanted was the vice presidential nomination.

That went instead to fellow New Yorker Geraldine Ferraro. As a consolation prize, Cuomo was given the keynote address.

And to use the baseball analogy, a sport a loved and in his youth wanted to play professionally, the Governor of New York hit it out of the ballpark.

After Reagan's crushing defeat of Democrat Walter Mondale in 1984, Cuomo became a much-talked about potential presidential candidate in 1988 and 1992.

But he backed out both times - at one point moments before he was going to board a helicopter to announce his candidacy in New Hampshire. He became known as the reluctant presidential candidate.

But he was hardly ever reluctant in New York. He was elected governor in 1982, after serving as Lieutenant Governor and Secretary of State. He even ran for Mayor of Mew York against Congressman Ed Koch. It turned into a dirty campaign, with posters plastered through the city - saying "Vote for Cuomo, not the homo," referring to Koch's rumored sexual preference.

Cuomo denied he or his campaign manager, his then 19 year old son Andrew, had anything to do with the placards but it tainted Koch's relationship with both Cuomos for years.

Mario Cuomo was born in the Briarwood section of Queens in 1932.

His parents, born in Italy, ran a store in South Jamaica. Mario was the oldest son but not the first. The Cuomos' first baby died. His name was Mario. Soon after, they had another baby son - they named him Mario as well.

Mario went to public school and then St. John's where, while in college, he signed to play professional baseball with the Pittsburgh Pirates. Baseball was the young Mario's first love. He was an outfielder and he used the $2000 signing bonus to buy an engagement ring for a girl named Matilda.

Till the day he died, Mario and Matilda Cuomo were rarely apart.

A career in baseball wasn't to be. Playing for the minor league Brunswick Pirates, Cuomo was hit in the head by a pitch. Back then, there were no helmets required. His playing days were over.

So he returned to St. John's, went to law school, but had a hard time hooking up with a law firm. He was discriminated against because he was Italian.

Protecting the underdog, whether it ethnic or income level, would become one of the benchmarks of the Cuomo legacy. He was also vehemently against the death penalty, vetoing several attempts to reinstate it in New York State.