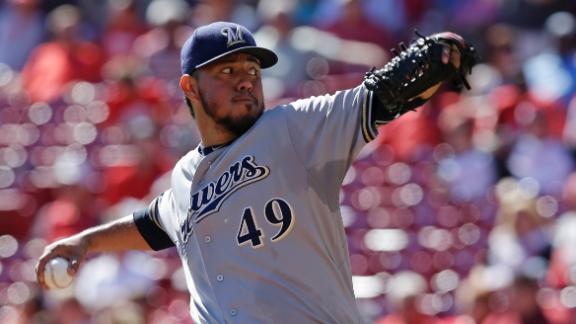 The Texas Rangers made their first major offseason move when they traded three minor leaguers to the Milwaukee Brewers for right-handed starter Yovani Gallardo on Monday.

Gallardo, 28, a native of Fort Worth, Texas, went 8-11 with a 3.51 ERA for the Brewers last season. He's seen as a durable pitcher, having made at least 30 starts the past six seasons and pitching more than 180 innings in six of his eight big league seasons.

The Rangers were seeking upgrades in the middle of their starting rotation this winter behind ace Yu Darvish and No. 2 starter Derek Holland. In Gallardo, the Rangers pick up a veteran pitcher who becomes the No. 3 starter and has a chance to sign a long-term contract if he has a successful season.

Gallardo will make $13 million in the final year of his contract and is open to signing a long-term deal with the Rangers if everything goes well in 2015. The Brewers will pick up $4 million of Gallardo's $13 million salary.

Rangers general manager Jon Daniels said he wanted to sign a veteran starting pitcher this offseason after the club used 15 different starters and compiled just 62 quality starts, the worst in baseball. The Rangers' wins above replacement average for starting pitchers was minus-6.6 -- only Boston's minus-8.0 was worse in the majors last season.

The Rangers are coming off a 95-loss season where several pitchers, including Matt Harrison (back surgery), Martin Perez (Tommy John surgery), Darvish (elbow inflammation) and Holland (knee surgery), were recovering from health issues. Darvish finished the season on the disabled list, and Holland returned for the final two months of the season. Harrison and Perez are not expected to be ready for the start of the 2015 season, as they're still recovering from their surgeries.

Outside of the Gallardo trade, the Rangers re-signed veteran Colby Lewis to become the No. 5 starter and traded two minor leaguers to the Washington Nationals for Ross Detwiler, who spent 2014 in the bullpen.

The Rangers plan on moving Detwiler back to the rotation in 2015. If Detwiler struggles, the club has young pitchers in Nick Martinez (5-12 in 24 starts last season) and Nick Tepesch (5-11, 22 starts) who could fill out the rotation as well.