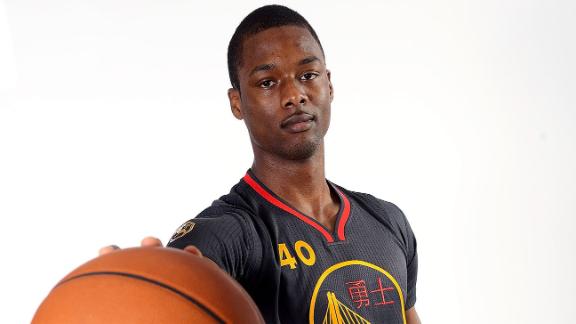 The Golden State Warriors announced on Monday that the team would wear a special Chinese New Year uniform.

Warriors is spelled out in Mandarin on the uniform's front, and the sleeve features a goat, the animal the Chinese attribute to this upcoming year. The jersey also features red and yellow piping. Red is the color associated with good luck, while yellow is connected to wealth and happiness.

"The meaning of a warrior certainly translates into the Chinese culture well as they are very familiar with what being a warrior means," said Rick Welts, the team's president and chief operating officer. "I think they'd be hard-pressed to make a similar connection to the Lakers."

As was also announced by the team on Twitter, Golden State plans to start wearing the uniforms on Feb. 20 to celebrate the Chinese New Year, which starts the day before, and for three additional games.

Although the Warriors wouldn't benefit disproportionately if the team sold more jerseys or was on more TV broadcasts, Welts said the idea of having a Chinese company advertise with it in the U.S. is a distinct possibility. The Warriors have 1.5 million followers on Chinese social media site Weibo, more than any other NBA team.

"The popularity of the NBA is at an all-time high in China," NBA China CEO David Shoemaker said. "We think fans will want these special-edition jerseys as another way to connect with their favorite teams, and we will look closely at doing more special retail items like this in the future."

The Rockets, who are popular among the U.S. Asian population and in Asia thanks to a strong base in Houston and the career of Yao Ming, will also have a Chinese New Year jersey that they will first wear on Feb. 21.