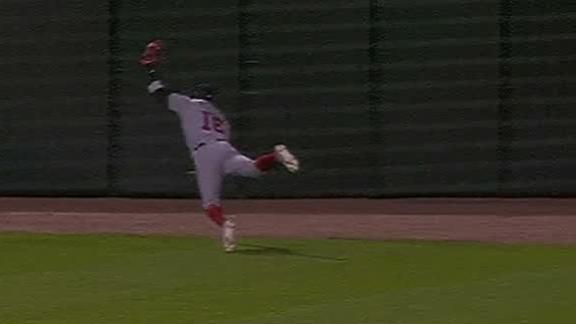 CHICAGO -- Eloy Jimenez believes he's much improved since the start of the season and will continue to grow throughout his rookie year.

Welington Castillo hit a grand slam and Jimenez homered at home for the first time, powering the Chicago White Sox to a 7-5 win over the Washington Nationals on Tuesday night.

Castillo got his second career slam, with the other coming June 14, 2017, in the same ballpark when he played for the Baltimore Orioles.

Jimenez went 2 for 3 with two RBI and three runs. He drove a 1-1 pitch from Washington starter Patrick Corbin (5-5) over the batter's eye in center and onto the concourse for an estimated distance of 462 feet. The 22-year-old came into the game hitting .266 with no homers and three RBI in 18 home games and .205 with eight homers and 14 RBI in 23 road games.

"I know I'm getting better," he said. "This is pretty much one of my best games, but there's more to come."

Jimenez also made a nice sliding catch on a liner to left in the eighth to help thwart a Nationals comeback attempt.

Anthony Rendon homered twice for the Nationals, who snapped a three-game winning streak.

"It's just been frustrating trying to figure out what I'm doing wrong," he said. "I just gotta make better pitches out there, execute and just try to get better results."

Reliever Evan Marshall (1-0) retired all four batters he faced to get the win. Marshall replaced starter Manny Banuelos with two outs and two on in the fifth and got Howie Kendrick to line out to third.

Alex Colome got the final five outs -- working out of a bases-loaded jam in the eighth -- for his 14th save in 14 chances.

Rendon's two-run shot with one out in the first gave the Nationals a quick 2-0 lead.

Chicago answered in the bottom half of the inning. Jose Abreu doubled off the wall with two outs and James McCann and Jimenez followed with walks to load the bases. Castillo then drove a 2-0 fastball from Corbin over the wall in center for a 4-2 lead.

Corbin retired the next seven batters before Jimenez led off the fourth with his long homer to make it 5-2.

In the sixth, Jimenez chased Corbin with an RBI double for a 6-2 lead. Yolmer Sanchez then drove in Jimenez with an RBI single to make it 7-2.

Washington pulled within three in the eighth on a two-run double by Yan Gomes off reliever Aaron Bummer. Later in the inning, the Nationals loaded the bases with two outs, but Colome got Adam Eaton to fly out to center.

Rendon led off the ninth with his second homer to cap the scoring.

Jimenez's tape-measure shots -- he also had a similar one to center in Kansas City over the weekend -- has caught the attention of his teammates, including slugger Abreu.

"He says I'm not 22-years-old because I hit a ball too far," Jimenez said.

Center fielder Victor Robles had the defensive play of the game with a diving catch on the warning track to take an extra base hit away from Chicago's Leury Garcia.

Plate umpire Chad Whitson was struck in the head on a backswing by Chicago's Ryan Cordell in the second inning. After receiving treatment for several minutes by the White Sox training staff, Whitson was able to continue.

Nationals: 1B Matt Adams sat out with a left oblique strain suffered on a check swing Monday, but manager Dave Martinez is optimistic Adams will just miss the one game. "He's a lot better than we anticipated," Martinez said.

White Sox: 3B Yoan Moncada was out of the lineup after leaving Monday's game after the sixth inning. He's listed as day-to-day with a mild mid lat-back strain. "He's doing better today," manager Rick Renteria said. "We'll continue to monitor him. We have a day off tomorrow and we'll reevaluate him on Thursday."