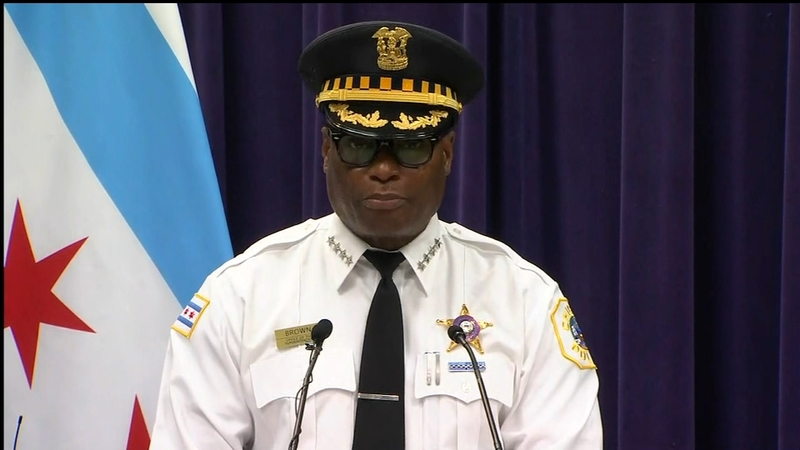 Fifty-one people were shot, 10 fatally, across Chicago over the weekend from 6 p.m. Friday until 11:59 p.m. Monday, including an 8-year-old girl who was fatally shot Monday while riding in a SUV on the South Side, according to Chicago police.

The girl and three adults were sitting in a Subaru SUV at the stop light on Union Avenue at West 47th Street when police say the gunman's car intentionally pulled up behind them, targeting someone inside.

The girl and two adults inside the SUV suffered gunshot wounds, police said.

"The victims' vehicle continued northbound on Union and crashed into a tree," McDermott said.

The 8-year-old girl was taken to University of Chicago Comer Children's Hospital, where she was pronounced dead. She has been identified to the Cook County Medical Examiner's Office as Dajore Wilson.

"Getting notified about another child being a victim of gun violence is one of the most painful experiences, not only as a law enforcement professional, but also as a parent," Superintendent Brown said.

The superintendent said police have recovered more than 200 illegal guns over the weekend. He also said he would be extending the use of the CPD Summer Mobile Patrol Unit for another 90 days.

Chicago police investigate after a shooting that left an 8-year-old girl dead and three others injured in the Canaryville neighborhood.

At the crime scene, police pointed out on more than one occasion that they, too, are emotionally exhausted by the rate of gun violence in the city, particularly this summer.

Chicago police canceled days off for officers ahead of the holiday weekend and extended shifts to 12 hours to put about 8,000 officers on the street in an effort to stem a tide of violence that typically accompanies long holiday weekends.

One man was shot to death and three others wounded during a shootout Monday in Stony Island Park on the South Side.

Two men, 21 and 30, were traveling northbound in a red Nissan Altima in the 8400 block of South Cregier Avenue when two 18-year-old men on foot fired shots, Chicago police said.

One man in the backseat of the Nissan returned gunfire, striking both gunmen, police said.

The injured men in the Nissan were taken to the University of Chicago Medical Center, police said. The 21-year-old was shot in the neck and was pronounced dead, and the older man was listed in good condition with a gunshot wound to the thigh.

Both 18-year-olds are being questioned by investigators, police said. The man who returned shots has a valid conceal carry license.

Man, 22, killed in Humboldt Park shooting on West Side

Another man was killed Monday in Humboldt Park on the West Side, Chicago police said.

According to police, the 22-year-old was in a vehicle about 6:36 p.m. in the 1200 block of North Lawndale Avenue when someone approached and fired shots.

The man was struck multiple times and taken to Mount Sinai Hospital, where he was pronounced dead.

No further victim information has been released at this time.

Person in custody after 2 shot in Englewood

Two men were shot during a fight Monday in Englewood on the South Side.

According to Chicago police, around 1:15 a.m. a 56-year-old man shot two men, ages 30 and 37, during a fight outside in the 6300-block of South Ashland Avenue when he claims one of the two men lifted up their shirt to display a handgun.

A 30-year-old man was grazed in the arm and declined medical treatment before leaving the scene, police said. The other man, 37, was shot in the arm and torso and was taken to the University of Chicago Medical Center in critical condition.

The shooter was taken into custody with charges pending, police said.

A police source said he has a valid FOID card, but it was not immediately clear whether he has a concealed carry license.

A man was shot dead Sunday in Brighton Park on the Southwest Side.

According to police, two men approached the victim around 9:10 p.m. and tried to fight him in the 2600-block of West 39th Place. As he tried to run away, a third male walked up and shot him in the back, police said.

The victim was identified as, Steven Garcia, 38, of Brighton Park, was pronounced dead at St. Anthony Hospital, according to police and the Cook County medical examiner's office.

At least four people, including a teen boy, were hurt in a shooting Sunday in South Shore.

They were gathering on the sidewalk about 6:25 p.m. in the 7700-block of South Kingston Avenue when someone inside a white SUV fired shots, Chicago police said.

All four people were hospitalized in good condition, police said.

A 17-year-old boy hit in the shoulder and a 25-year-old woman shot in the leg were taken to the University of Chicago Medical Center, police said. Another male, whose age isn't known, was taken to the same hospital with gunshot wounds to the leg and knee.

A 44-year-old man was taken to South Shore Hospital with a gunshot wound to the foot, police said.

No arrests have been made. Area Two detectives are investigating.

3 wounded, 1 critically, in drive-by in Gresham

Three people were wounded, one critically, in a drive-by Sunday in Gresham on the South Side.

About 1:40 p.m. the group was standing in front of a residence in the 8000-block of South Green, when someone in a black Chevy Impala drove by and fired shots, Chicago police said.

A 22-year-old man was struck in the hand and take to St. Bernard Hospital in fair condition, police said.

No one is in custody as Area Two detectives investigate.

A person was found shot to death Sunday in University Village on the Near West Side.

Officers responding to reports of gunfire at 3:26 a.m. found a man on the ground with two gunshot wounds to the side of his head in the 1300 block of West Hastings Street, according to Chicago police.

He was taken to Stroger Hospital, where he was pronounced dead a short time later, police said. The Cook County medical examiner's office has not released any further details about the fatality.

Witnesses told investigators an unknown suspect had approached and opened fire into a crowd, police said.

A 26-year-old man was shot dead at a gathering Sunday in West Town.

He was outside about 2:25 a.m. in the 2100-block of West Maypole Avenue when he was shot in the shoulder and foot, Chicago police said. He was pronounced dead at Stroger Hospital.

No arrests have been made as detectives investigate.

A 36-year-old woman was shot inside a home Sunday in Englewood.

About 1:08 a.m., someone entered the home in the 6100-block of South Carpenter Street and unleashed gunfire, Chicago police said. She was shot multiple times in the head and body, and she was pronounced dead at the University of Chicago Medical Center.

Police said it was not immediately clear whether there was any relationship between the shooter and the woman, but the incident is not being investigated as a break-in or home invasion.

2 shot during argument in Prairie Shores on South Side

Two men were injured in a shooting Saturday in Douglas on the South Side.

A group was hanging out in a vacant lot at 10:38 p.m. in the 3000-block of South Cottage Grove Avenue when an argument broke out and someone fired shots, according to Chicago police.

Police said both victims were uncooperative with investigators and one refused to provide his personal information.

A teenage boy was shot Saturday in Oakland on the South Side.

Someone in a black SUV fired shots at the 16-year-old about 4:30 p.m. near 40th Street and Lake Park Avenue, Chicago police said.

The boy was struck in the hand and taken to Comer Children's Hospital in good condition, police said.

A man was shot and killed by Chicago police after allegedly lunging at a CPD sergeant with a knife Saturday in Vittum Park in Garfield Ridge.

Officers were called about 1:40 a.m. for reports of a person stabbed near 49th Street and Lavergne Avenue, according to a police source. When they arrived, they saw a man holding a "long, large butcher knife."

Chicago police said they recovered a knife from a person shot by officers Saturday morning, near 49th Street and Lavergne Avenue in Garfield Ridge.

In a statement, Chicago police said the suspect stabbed an officer in the protective vest before officers used a stun gun on him.

The suspect dropped to his knees before removing the prongs and lunging at the female sergeant, the source said.

Officers then shot the man multiple times, according to police. He was pronounced dead at the scene.

Three officers were taken to a hospital for observation, according to police.

The victim in the initial stabbing was also taken to a hospital, according to COPA.

Chicago police spokesman Tom Ahern tweeted a photo of the knife, which he said was recovered at the scene.

Eaddy said COPA is "actively investigating the actions of the officers to determine if the use of deadly force is in accordance with Department policy." The agency is canvassing the area for witnesses, third-party video and other evidence.

Police said the officers involved will be placed on administrative duties for 30 days while COPA investigates.

A man was shot while driving Saturday in West Englewood on the South Side.

The 34-year-old was driving at 4:36 a.m. in the 1900 block of West 74th Street when someone fired shots from a white vehicle, according to Chicago police.

He was hit multiple times in the torso and crashed his vehicle into an unoccupied parked car in the same block, police said. He was taken to Christ Medical Center in Oak Lawn in critical condition.

A teenage girl was injured by gunfire Saturday while riding in a vehicle on the Near West Side.

The 16-year-old was a passenger in a car about 2:45 a.m. in the 200 block of South Ashland Avenue when she heard gunshots and felt pain, according to Chicago police. She and the other people in the car told police they didn't see the shooter or know where the shots came from.

The girl was hit in the face and taken to Stroger Hospital in fair condition, police said.