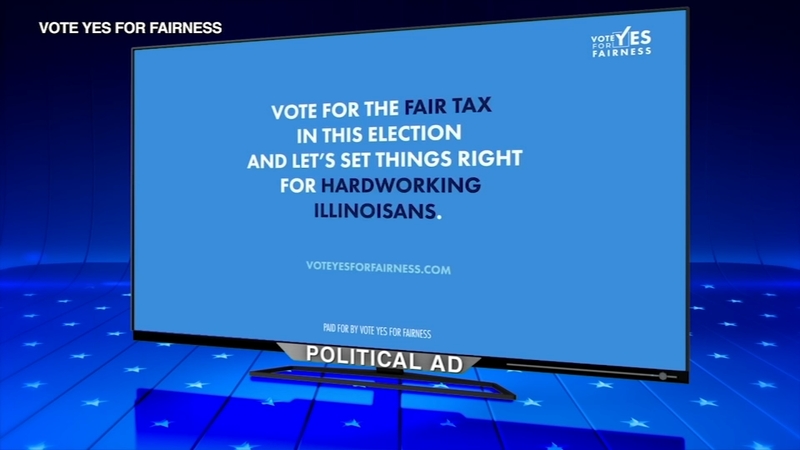 CHICAGO (WLS) -- Voters will decide whether Illinois will move to a progressive tax from a flat tax this November, and the advertising blitz is already underway.

Governor JB Pritzker, who is spearheading the measure, gave a massive donation recently to the vote yes side.


Voters will decide whether to change the state constitution to shift Illinois from the current flat tax to a progressive income tax. The fight for votes starts with a fight for attention.

One of the new vote yes ads plays off the current COVID-19 pandemic, contrasting the tax rate of essential workers to billionaires and millionaires. It's one of seven different digital ads coming to devices and streaming services across the state.

"What is the harm in asking those who have benefitted in Illinois because of the way that the tax structure has been for years and years and years to pay more to lift the burden off of middle and lower class families in the state of Illinois," said Quentin Fulks, executive director of Vote Yes for Fairness.

The effort is being funded almost exclusively by Governor Pritzker, who donated $51.5 million to the campaign last week.

"We don't need to spend dollar for dollar because frankly this is an unpopular idea once voters figure out what's going on," said Todd Maisch, president of the Illinois Chamber of Commerce.


One of the biggest points of contention could be over the impact of a progressive tax on small businesses.

But ABC7 Political analyst Laura Washington says the state of the economy in November could have a major impact on voters.

"I think if the economy rebounds it makes people feel more comfortable, considering new taxes," she said. "If we continue to stay in this hole and if it gets worse. I think it's going to hurt the fair tax people because people are gonna just think, no more taxes, I can't afford it."