College football predictions, awards and storylines for every conference 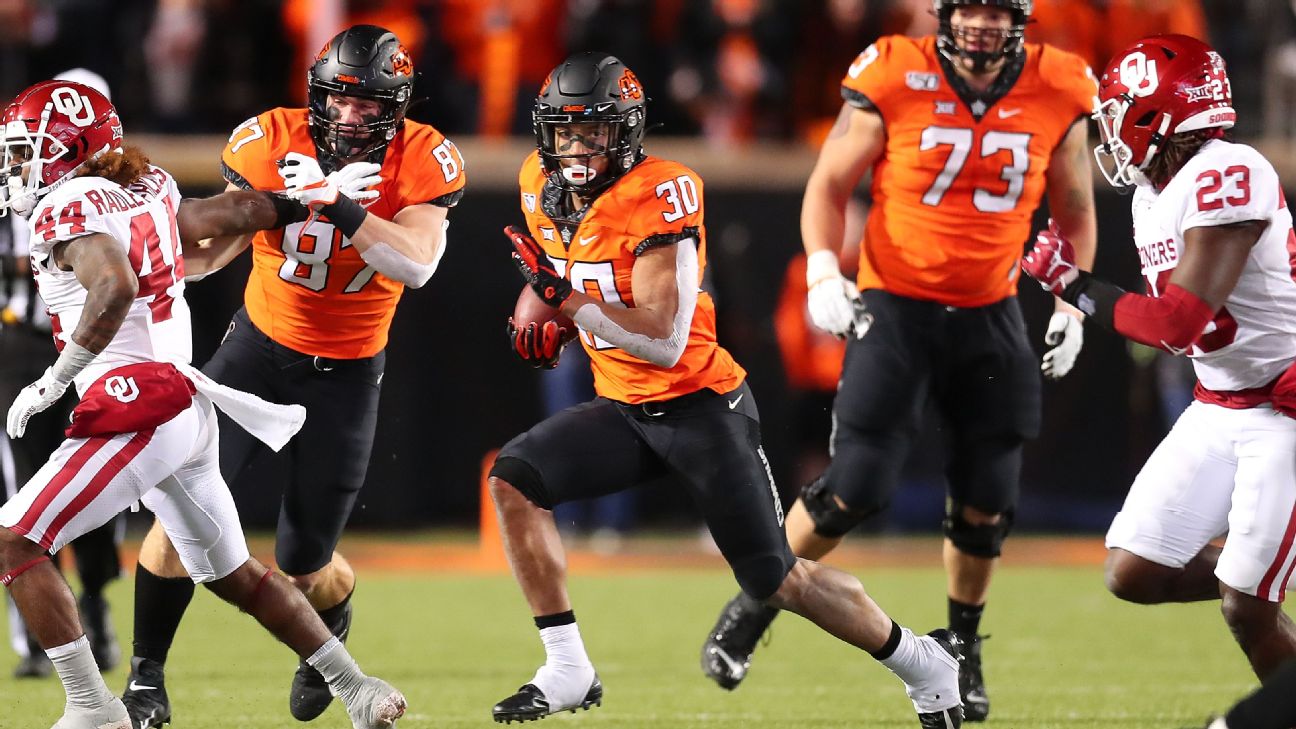 The strangest and seemingly longest offseason in college football history is finally over, and the ACC and Big 12 are scheduled to kick off this week, followed by the SEC in two weeks.

No one knows how the season is going to go -- or how long it will go -- but the Big 12 and ACC (now featuring Notre Dame!), along with the AAC, Conference USA, Sun Belt and a trio of independents, seem determined to plow ahead during the coronavirus pandemic. Depending on how things develop, the Big Ten and Pac-12 might only be a month or two away from joining them.


Which teams are going to play for the national title? Who will win the Heisman Trophy? Which coaches are on the hot seat?

In the middle of a pandemic, those seem like back burner questions.

Let's just celebrate that the 2020 college football season -- or at least some watered-down version of it -- will be played.

Here are my best guesses at how the six FBS conferences that are playing football this fall will shake out over the next couple of months:

Game of the year: Clemson at Notre Dame, Nov. 7

Nonconference game of the year: USF at Notre Dame, Sept. 19

Upset of the year: Pitt over Notre Dame, Oct. 24

Three predictions for the ACC

1. Clemson's long ACC winning streak ends at, ahem, Notre Dame: The Tigers, who have won five straight ACC titles, bring a 22-game winning streak against conference foes into the 2020 season. By the time Clemson travels to Notre Dame on Nov. 7, that winning streak will stand at 28 in a row, one shy of the ACC record set by Florida State from 1992 to 1995. The Tigers' streak will end in the most 2020 way possible, against the Fighting Irish, who are playing an ACC schedule this season because of the pandemic. The Tigers will get their revenge against the Irish in the ACC championship game.

2. Two ACC quarterbacks will be among the Heisman Trophy finalists: Trevor Lawrence, who threw for 6,945 yards with 66 touchdowns in his first two campaigns, is the preseason favorite to win the Heisman, assuming the Downtown Athletic Club decides to award one this year. With Ohio State's Justin Fields out of the race, another ACC quarterback will join Lawrence among the finalists. North Carolina's Sam Howell, Notre Dame's Ian Book, Miami's D'Eriq King and Louisville's Micale Cunningham all have a chance.

3. North Carolina knocks Notre Dame out of the CFP: After losing at Pitt on Oct. 24, the Irish will rebound to win their next three games, including the big upset of No. 1 Clemson, to remain in the CFP hunt. Notre Dame's dreams will end at North Carolina on Nov. 27, however, as Mack Brown pulls off another big upset.

Nonconference game of the year: Louisiana at Iowa State, Sept. 12

Upset of the year: Kansas State over Texas, Dec. 5

Three predictions for the Big 12

1. Texas wins Red RiverRivalry(but Oklahoma takes Big 12): The Sooners have won four of the past six games in the Red River Rivalry (along with a 12-point victory over Texas in the 2018 Big 12 championship game), but the contests in Dallas have been exceptionally close. Each of the past six were decided by a touchdown or less. This year's matchup at the Cotton Bowl will come down to the wire again, so I'll go with the more experienced quarterback in Longhorns senior Sam Ehlinger, who has already started four times against the Sooners. UT won't go 2-0 against Oklahoma this season, however, as Spencer Rattler and OU's improved defense will avenge the loss in the Big 12 title game to punch a ticket to the CFP for the fourth straight season.


2. Rattler will be a Heisman finalist: Is Lincoln Riley still coaching OU's quarterbacks and running the offense? Rattler, a redshirt freshman from Phoenix, will follow in the footsteps ofBaker Mayfield, Kyler Murray and Jalen Hurtsand put up video-game-like numbers. With top returning rusher Kennedy Brooks reportedly opting out, Rattler will have to carry the load with his arm and feet. He better have some bite.

3. Transfers will lead the Big 12 in sacks and tackles: Baylor lost All-AmericanJames Lynch, who led the league with 13 sacks in 2019. Arkansas State transfer William Bradley-King, who had 14 with the Red Wolves over the previous two seasons, should be ready to step right in. The same goes for former Arizona linebacker Colin Schooler, who transferred to Texas Tech last week. Schooler is the FBS active leader with 46 tackles for loss, and he had at least 90 tackles in each of the previous three seasons.

Coach on the hot seat: Will Muschamp, South Carolina

Game of the year: Florida vs. Georgia, Nov. 7

Upset of the year: South Carolina over Texas A&M, Nov. 7

Three predictions for the SEC

1. Two SEC teams make the CFP: With the Big Ten and Pac-12 punting to later this fall or next spring, there's an open spot for a potential second SEC team to reach the CFP. Because it's playing Alabama on the road, Georgia would probably have to win in Tuscaloosa or avenge that loss in the SEC championship game. If the Bulldogs were to drop two games to the Crimson Tide, Florida could sneak its way into the CFP without winning the SEC East. And of course, the No. 2 SEC West team would be a candidate if the SEC East teams falter.

2. LSU takes a big step back: The defending national champions already were facing a steep uphill climb in replacing Heisman Trophy winnerJoe Burrowand a dozen other players selected in April's NFL draft -- along with Aranda, who left for Baylor, and passing game coordinator Joe Brady, who departed for theCarolina Panthers. Then star receiverJa'Marr Chase, defensive tackle Tyler Shelvin and two other players opted out. That's too much turnover to stay in front of Alabama -- or maybe even Texas A&M -- for a second straight season.

3. Georgia wins the SEC East: With quarterbackJake Frommand four starting offensive linemen departing, Florida believes it has closed the gap on Georgia. Not so fast. Kirby Smart looks pretty ... well, smart after signing former Southern California quarterback JT Daniels as a security blanket in May. Expected starter Jamie Newman, a graduate transfer from Wake Forest, opted out last week. The Bulldogs have recruited offensive linemen as well as any team in the FBS, and wide receiver George Pickens is back after a stellar freshman campaign. Georgia's defense should be as good as it was a year ago, and if the Bulldogs get anything more from their sputtering offense under new coordinator Todd Monken, they will beat the Gators in Jacksonville and win their fourth straight SEC East title.

Game of the year: Cincinnati at UCF, Nov. 21

Nonconference game of the year: Army vs. Navy, Dec. 12

Three predictions for the AAC

1. Cincinnati is a CFP contender: Any of the top three AAC teams are good enough to win the league. But because defense still wins championships, I'll go with the Bearcats, who are going to be exceptional on that side of the ball. The Bearcats lost to Memphis twice last season, but Tigers coach Mike Norvell took the Florida State job and star tailback Kenneth Gainwell opted out. Cincinnati plays three of its more difficult AAC games on the road -- at SMU, UCF and Temple -- but hosts Memphis. With only one loss, Cincinnati will be a legitimate CFP contender and might become the first team from a non-Power 5 league to grab one of the four spots.


3. SMU'sShaneBuechele is the top quarterback in Texas: Texas' Sam Ehlinger and Texas A&M's Kellen Mond might be bigger names, but Buechele is going to put up massive numbers in Mustangs coach Sonny Dykes' pass-happy offense. After losing the starting job to Ehlinger at Texas, Buechele resurrected his career at SMU, passing for 3,929 yards with 34 touchdowns last season.

Game of the year: Western Kentucky at UAB, Oct. 17

Nonconference game of the year: UAB at Miami, Sept. 10

Upset of the year: Charlotte over Duke, Oct. 31

1. UAB wins the league: The Blazers didn't look great in their opening 45-35 victory over Central Arkansas on Thursday night, but a lot of teams aren't going to look good coming out of the gates after most missed spring practice because of the pandemic. The Blazers turned the ball over three times and committed eight penalties, which are mistakes that coaches can correct. The Blazers rarely lose at home, winning 19 games in a row at Legion Field, a Conference USA record, and that is where they'll play Western Kentucky on Oct. 17.

2. Rice makes a bowl game: The Owls haven't had a winning season since 2014 and combined to win only nine games over the past four seasons. After losing their first nine games last season, however, they closed by winning three in a row under Bloomgren. The former Stanford assistant has upgraded the talent and built a solid defense, and now it's time to fix an offense that averaged only 294.2 yards and fewer than 18 points per game. TCU transferMike Collinsmight be the answer at quarterback.

3. A Hilltopper leads the FBS in sacks: With Ohio State'sChase Youngmoving on and Miami's Gregory Rousseau opting out, Western Kentucky's DeAngelo Malone might be the best returning pass-rusher in the FBS. The reigning Conference USA defensive player of the year had 11 sacks and 21 tackles for loss last season; the Atlanta native had 17 sacks the previous two seasons combined.

Game of the year: Appalachian State at Georgia Southern, Oct. 14

Nonconference game of the year: Louisiana at Iowa State, Sept. 12

Upset of the year: Arkansas State over Kansas State, Sept. 12

Three predictions for the Sun Belt

1. Somebody from the Sun Belt will knock off someone it isn't supposed to beat: Last season, Fun Belt upsets were as abundant as angry Big Ten parents. Appalachian State won at North Carolina and South Carolina; Coastal Carolina beat Kansas; and Georgia State stunned Tennessee. Georgia Southern had Minnesota on the ropes, and UL-Monroe lost at Florida State in overtime. With the SEC going to a conference-only schedule, there won't be as many opportunities (or big paydays) this year. The Chanticleers return to Kansas; Arkansas State plays at Memphis and Kansas State; Louisiana goes to Iowa State; and Texas State travels to Boston College. At least one of those favorites (or the Jayhawks) is going down.

2. If Appalachian State goes undefeated, it'll play in a New Year's bowl: If the Mountaineers, under first-year coach Shawn Clark, can get through October unscathed -- which would require beating Louisiana (home), Georgia Southern (road) and Arkansas State (home) in consecutive weeks -- they'll be overwhelming favorites in their final five games. A 12-0 record and conference title might give them a shot at a New Year's Six bowl, even with a very soft schedule; and 11-1 might put them in position to replace a Big Ten team in a New Year's Day bowl game in Florida. I think the Mountaineers will lose at least once, probably at Georgia Southern.

3. Arkansas State is the best team in Arkansas: OK, that one is too easy. Enjoy the games. 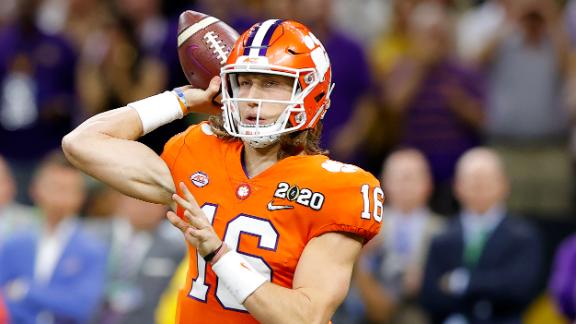 Why Clemson is the overwhelming favorite in the ACC
Brad Edwards explains why Clemson has a great shot to win its sixth straight ACC title. 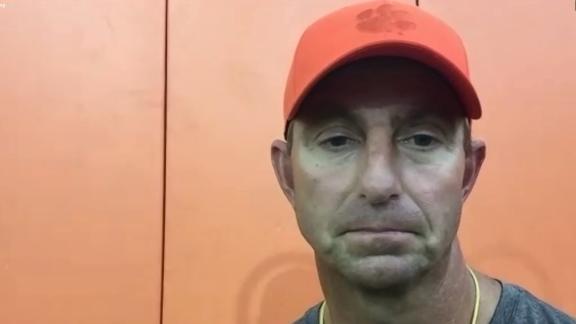