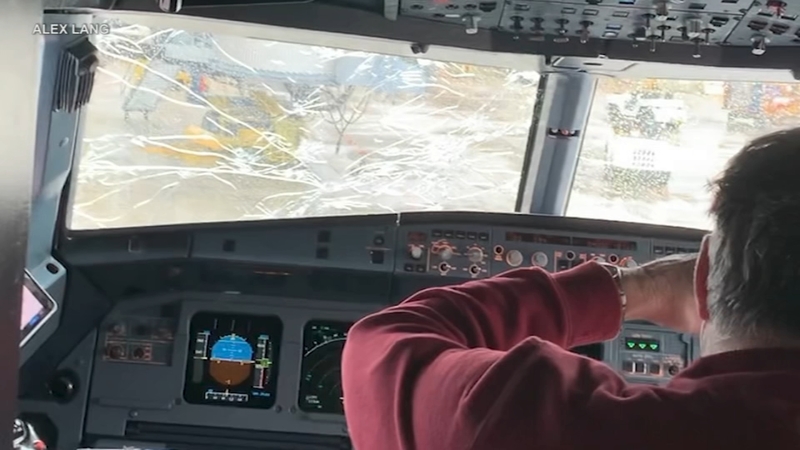 CHICAGO (WLS) -- A plane was forced to make an emergency landing at Chicago's O'Hare International Airport Monday after hail damaged its windshield.

From the aisle of the plane, an exiting passenger on United Airlines Flight 349 snapped a picture of a nearly-shattered windshield. The flight was headed to Washington D.C before it turned back to land at O'Hare.

"I was thinking to myself, 'how did that happen?'" passenger Janet Richards said.

After Flight 349 took off from O'Hare mid-afternoon, a flight tracker shows it got out over Lake Michigan headed east, but then abruptly turned around.

"When we hit probably 16,000 height, there was a pitch sound that changed," Richards said. "There was no bump, there was no shift or movement. "

Back on the tarmac at O'Hare, fire trucks came rushing to the plane in case there was any need for evacuation.

"That's when I realized we got lucky," Richards said. "It happened right over Lake Michigan so everybody was fortunate. We're here walking on the ground instead of being in the water."

United said the damage was caused by hail from afternoon storms that pelted the plane's windshield. But passengers who rode out the weather storm, mostly oblivious to the danger, said it was a talented pilot who maneuvered them safely back to solid ground.

"I'll be really happy, really happy to go back to work tomorrow," Richards said, choking back tears. "Like ok, things are back to normal. I made it."