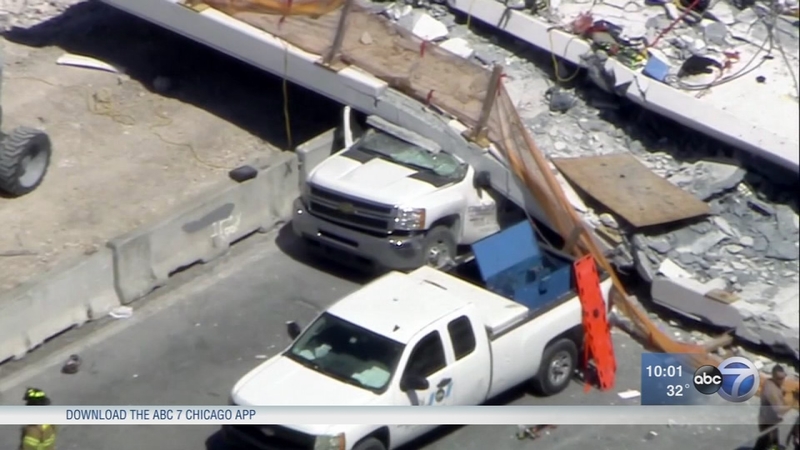 MIAMI -- A pedestrian bridge that was under construction collapsed onto a busy Miami highway Thursday afternoon, crushing vehicles beneath massive slabs of concrete and steel and killing at least four people, authorities said.

Search-and-rescue crews worked into the night, using dogs, search cameras and sensitive listening devices in a frantic search to find survivors among the debris.

"Everybody is working hard to make sure we rescue anyone who can be rescued," Florida Gov. Rick Scott said.

"We know that there's going to be a negative outcome at the end of the day," Perez said.

Four people were found dead amid the chaotic scene, and nine victims were taken "early on" to hospitals, Fire Chief Dave Downey said without elaborating on their conditions.

The partially built 950-ton (860-metric ton) bridge had been assembled by the side of the highway and moved into place Saturday to great fanfare. The span stretched almost 200 feet (60 meters) to connect Florida International University with the city of Sweetwater. It was expected to open to foot traffic next year.

Scott said an exhaustive investigation will uncover "why this happened and what happened," and he vowed to hold accountable those responsible.

National Transportation Safety Board chairman Robert Sumwalt III said a team of specialists was heading to Miami on Thursday night to investigate.

Jacob Miller, a senior at FIU, was visiting a friend in a dorm when he heard sirens and horns honking. He went to a balcony and could see rubble coming down.

"I saw there were multiple cars crushed under the bridge. It was just terrible," he said.

An accelerated construction method was supposed to reduce risks to workers and pedestrians and minimize traffic disruption, the university said. 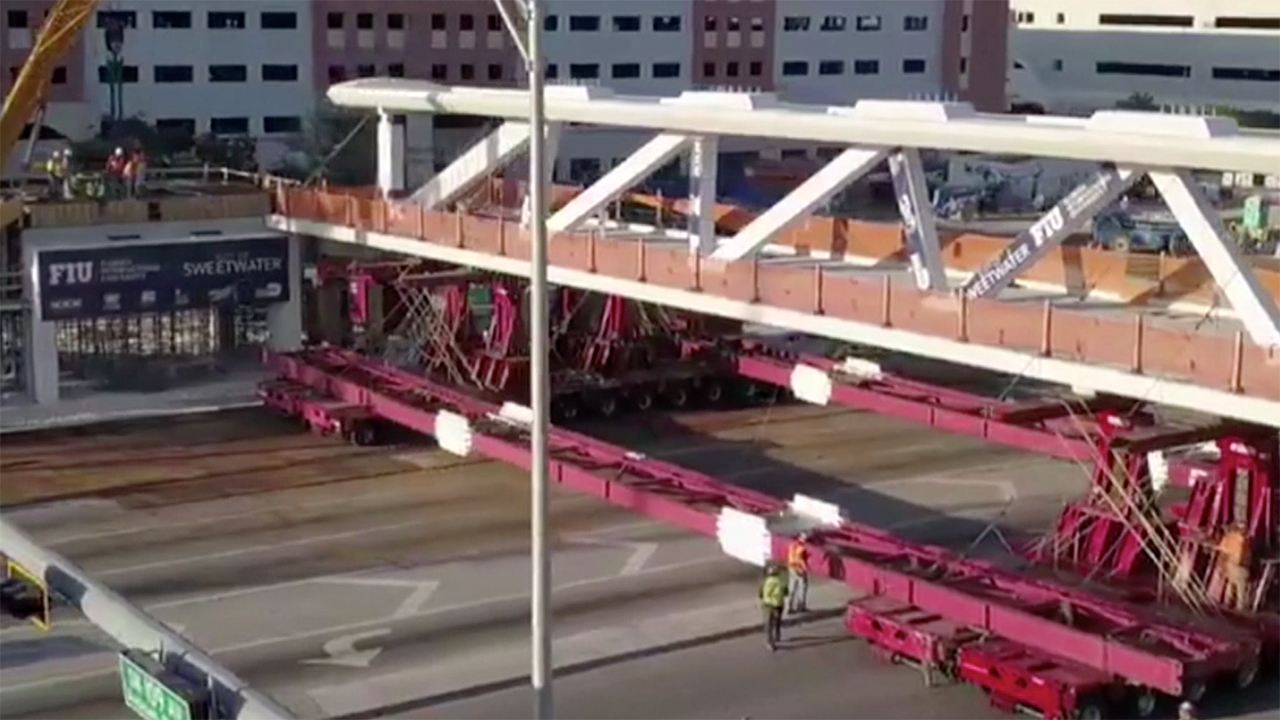 Collapsed Florida International University bridge was just installed days ago
The bridge that collapsed onto a busy Miami thoroughfare and killed multiple people below had been installed just days before the fatal accident.
Renderings of the finished bridge showed a tall, off-center tower with cables attached to the walkway to support it. When the bridge collapsed, the main tower had not yet been installed, and it was unclear what the builders were using as temporary supports.

Robert Bea, a professor of engineering and construction management at the University of California, Berkeley, said it's too early to know exactly what happened, but the decision to use what the bridge builders called an "innovative installation" was risky, especially because the bridge spanned a heavily traveled thoroughfare.

"Innovations take a design firm into an area where they don't have applicable experience, and then we have another unexpected failure on our hands," Bea said after reviewing the bridge's design and photos of the collapse.

Sweetwater police Detective Juan Llera was in a nearby meeting when the bridge collapsed.

"I heard a 'boom' like a bomb had exploded," he said. "At first I thought it was a terrorist attack."

He said he saw three injured construction workers. One had a head injury and was passing in and out of consciousness, another one had a leg injury and the third was lying on the street unconscious. Llera started performing CPR on him.

"We were able to keep him alive to send him to the hospital," Llera said.

Kendall Regional Medical Center received 10 injured people. Of those, two were in "extremely critical" condition and eight were stable with injuries such as broken bones, bruises and abrasions, said Dr. Mark McKenney, the hospital's director of general surgery.

Of the two more serious cases, one arrived in cardiac arrest but was revived. The other had a serious brain injury, McKenney said.

The main companies behind the $14.2 million construction project have faced questions about their past work, and one was fined in 2012 when a 90-ton (80-metric ton) section of a bridge collapsed in Virginia.

Munilla Construction Management, or MCM, the Miami-based construction management firm that won the bridge contract, had a news release on its website touting the project with FIGG Bridge Engineers, a Tallahassee firm. After the collapse, it said the site had become temporarily unavailable due to increased web traffic. "It has since been restored."

MCM said on Twitter that it is "a family business and we are all devastated and doing everything we can to assist. We will conduct a full investigation to determine exactly what went wrong and will cooperate with investigators on scene in every way."

FIGG said in a statement, "In our 40-year history, nothing like this has ever happened before."

But FIGG was fined in 2012 after a 90-ton (80-metric ton) section of a bridge it was building in Virginia crashed onto railroad tracks below, causing minor injuries to several workers. The citation from the Virginia Department of Labor and Industry said FIGG did not properly inspect a girder and had not obtained written consent from its manufacturer before modifying it, according to a story in The Virginian-Pilot.

Court documents show that MCM was accused of substandard work in a lawsuit filed earlier this month. The suit said a worker at Fort Lauderdale International Airport, where the company is working on an expansion, was injured when a makeshift MCM-built bridge collapsed under his weight.

The suit accused the company of employing "incompetent, inexperienced, unskilled or careless employees" at the job site.

A review of Occupational Safety Health Administration records shows that MCM has been fined for 11 safety violations in the past five years. The fines totaling more than $50,000 arose from complaints about unsafe trenches, cement dust and other problems at its Florida work sites.

Florida International University is the second largest university in the state, with 55,000 students, most of whom live off-campus. The bridge was supposed to be a safe way to cross a busy highway.

A university student was killed in August while crossing the road that the bridge was supposed to span.