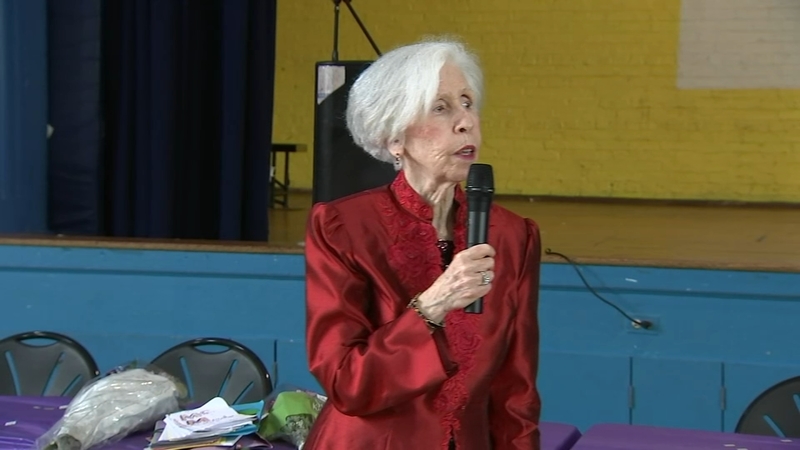 CHICAGO (WLS) -- After spending 50 years as a principal at a catholic school on Chicago's South Side, Pat Murphy is retiring at the end of the school year.

Many students, teachers and former staffers showed their gratitude and appreciation Wednesday at a celebration for Murphy.

"So this is an unbelievable day, moment in time for me," Murphy said.

Now, the long-time beloved principal of the Academy of St. Benedict the African Catholic School said it's time to say goodbye.

"When I look out at all of you, I know the reason I happily got up every day to come here to school," she said.

The educator was celebrated for her dedication and commitment to this South Side community.

St. Benedict the African is the only private catholic Pre-K through 8th-grade elementary school in the Englewood neighborhood.

"Ms. Murphy is a just jewel. You have to know her, but she opens her heart to everybody," Johnson said.

During an all-school assembly, each grade presented gifts to their principal, while some of the school's 240 students showered Murphy not only with songs but also words of encouragement and expressions of gratitude.

By some accounts, Murphy is only the school's third principal. She said she came to Chicago in 1972 looking for an opportunity and never thought she'd become a teacher, let alone a principal and president of a school.

"None of it was in my plan," she said, "but I think if you leave yourself open to the opportunities that are there and say a few prayers along the way, you'll get to the right spot. That's what happened for me."

Over the years, Murphy has guided the school through several challenges from low enrollment and the threat of closure, to inner city violence, COVID and a teacher shortage. She's seen it all.

"She always said she wanted to do something important with her life," said Jennifer Farrand, who's taking over as principal. "She's done more than something important, she's influenced the lives of generations of families in this community."

Murphy was also presented a certificate of appreciation from the Chicago Police Department's 7th District, and back in April, a scholarship was established in her name for families wanting their children to attend the South Side Catholic school.

The last day of school is June 7.