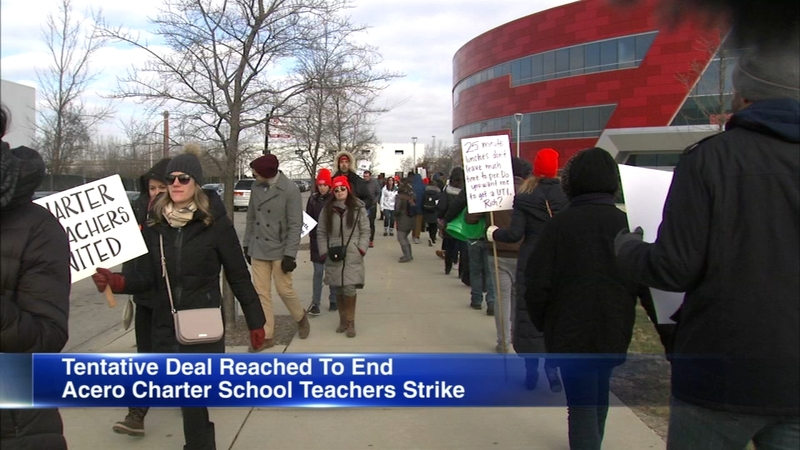 CHICAGO (WLS) -- The Acero Charter School Network reached a tentative agreement early Sunday with its teachers, who have been on strike since Tuesday.

More than 500 teachers from all 15 Acero charter schools walked off the job Tuesday, becoming the first charter school educators to do so in U.S. history.

At issue throughout seven months of negotiation were class sizes, increases in special education staff and greater compensation. Acero teachers said they were paid significantly less than their Chicago Public Schools counterparts despite working longer days and having a longer school year overall.

In the tentative agreement reached Sunday, Acero Schools and CTU agreed to shorten teachers' work day, workload and the school year to more closely align with CPS. Despite these changes, the amount of instructional time students receive will not be impacted, according to a press release from Acero Schools.

Teachers and staff will also receive raises over the four-year term of the contract.

More than 90 percent of Acero students are Latino. Teachers were asking for "sanctuary school" provisions to be implemented, including not sharing information with Immigration and Customs Enforcement and not allowing ICE officials inside schools without a warrant. Acero Schools agreed to incorporate those practices, according to the press release detailing the agreement.

Acero teachers are represented by the Chicago Teachers Union. Pending a CTU vote on the tentative agreement, classes are expected to resume Monday.