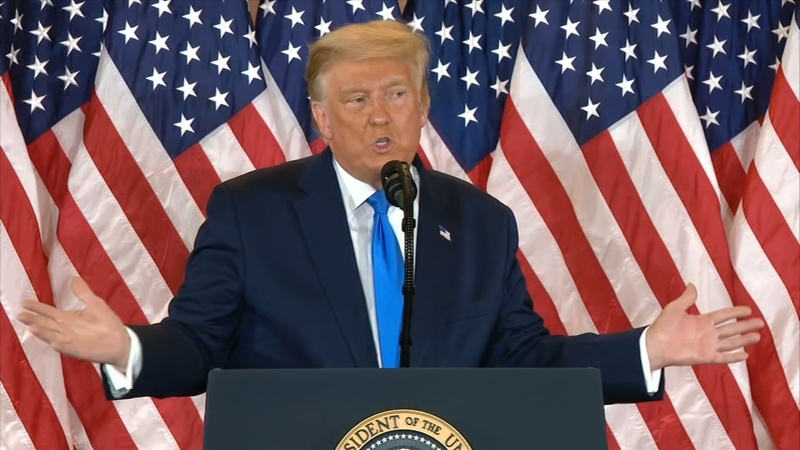 Kinzinger, from Channahon, joins a small group of other GOP political figures who don't like the president's response to the emerging election outcome.

His first reprimand of Trump was in an overnight tweet, which he reiterated in even stronger terms in an interview with the ABC7 I-Team.

Trump's tweet Tuesday night accused his opponents of trying to "steal the election," and was sent as votes were still being counted. It was later covered up and labeled by Twitter as misleading.

Comments like that are of concern to Rep. Kinzinger, especially with the potential to inspire and empower the kinds of things seen in places like Kenosha, where two people were shot and killed and a third was injured during a protest following the police shooting of Jacob Blake.

"Yeah, certainly. I'm certainly concerned that, you know, comments like this can spark violence," Kinzinger said. "I think right now, what we've seen around this country, is it's too easy for people to jump up. And whether it's burned buildings, whether it's attack protesters, or whether it's, you know, shootings, it's too easy to jump to that violence level now."

Kinzinger pointed out there is a legal process for legitimate election complaints.

"But throwing kind of cold water on the legitimacy of an election is very dangerous for the democracy," he warned.

The president has filed lawsuits in Michigan and Pennsylvania, and is asking Wisconsin for a recount. Late Wednesday evening the Trump campaign also filed a lawsuit in Georgia.

"We haven't been presented with any evidence that there has been actual fraud, actual corruption," said ABC7 legal analyst Gil Soffer. "Ultimately, though, there has to be evidence of fraud or mistake or irregularities, and that it makes a difference. So, if the margin of victory is broad enough, is wide enough for Biden, then the Trump campaign has a very uphill battle."