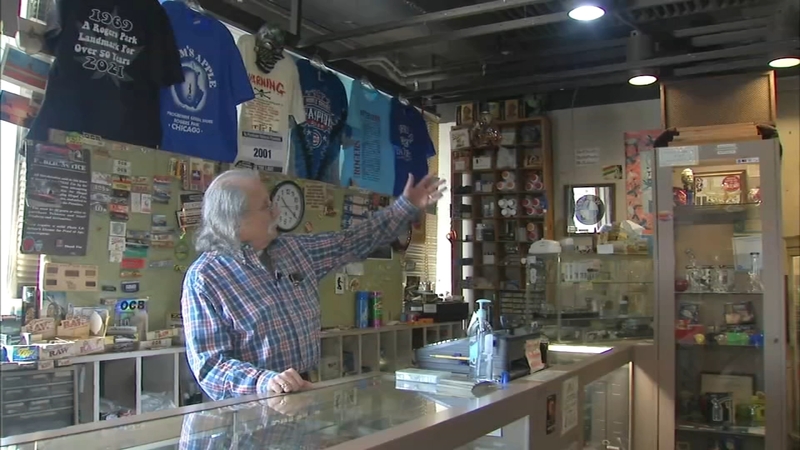 CHICAGO (WLS) -- The booming recreational marijuana business in Illinois has become a multi-billion dollar industry in just a couple short years. But with the beginning of that era comes the end of another, and it's forcing Adam's Apple, a North Side fixture for more than 50 years, to close its doors.

Adam's Apple is Chicago's oldest head shop, in West Ridge. Head shops used to be the place for people to find rolling papers and other paraphernalia used to smoke marijuana, but never sold cannabis themselves. Now those items can be easily procured at the same dispensaries where Illinoisans can buy recreational weed.


Known for its embrace of hippie culture, Adam's Apple will close its doors for good on Valentine's Day.

The shop first opened its doors in 1969 after Sheldon Miller, now 75, and an ex-partner took over the struggling business from a couple selling copies of 8-tracks, along with pipes and rolling papers. Early on the head shop became known for offering paraphernalia of the pot culture.

"When I heard they were closing after all these years I said, I have to go there," said Andre Gloeckner, customer.

After Miller, a Navy veteran, began advertising on the iconic WLS radio station, which at the time played rock music, Adam's Apple became a destination for young people of the counterculture.

"It was the destination to come, and things built from there," Miller said.


Adam's Apple has had its challenges too, but Miller said it survived only to be done in by a shrinking customer base.

"There's all these other smoke shops, vape shops all over everywhere," he said.

The head shop was also never able to cash in on the legalization of cannabis. Sales of recreational weed reached $1.4 billion in Illinois in 2021.

Sheldon said he'll retire on February 14, a day before his business license expires. He's not quite sure what exactly is next for him.