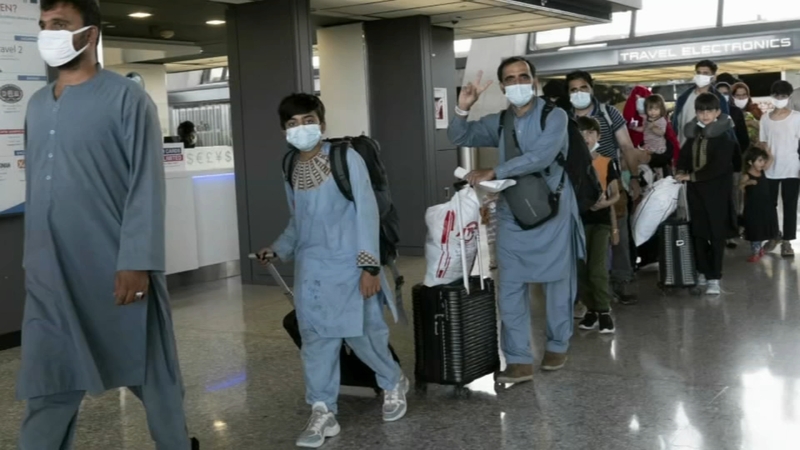 CHICAGO (WLS) -- Ahmadullah Qazi left Afghanistan as a refugee two days after the fall of Kabul to the Taliban when American troops pulled out in August of 2021.

He was sponsored by his father, a U.S. citizen.

The Kabul airport was his home for two days before he boarded a plane making his way to Europe and eventually, settling in the Chicago area three months ago.

"Day by day it become better," he said.

Faced with a regime change in Afghanistan, threats of retaliation and bodily harm, and with fears of a total economic collapse, tens of thousands of Afghans did everything they could to leave, some clinging to American military planes in desperation.

And now the Council of Islamic Organizations of Greater Chicago said 400 more Afghan refugees in need are soon expected in the city.

"(They) don't have family, have no resources, they really have no one to depend on, no one to go, but us," said Gregory Abdullah Mitchell, Council of Islamic Organizations of Greater Chicago Executive Director.

The CIOGC said they were contacted by the Department of Homeland Security and Illinois Department of Human Services to find housing and basic necessities for the refugees now coming from military bases around the country.

"We would ask communities to adopt these families. Help us help them become a part of our greater community," he said.

Mitchell said the Afghan refugees coming in the coming weeks come with little or nothing, and that's why the CIOGC is asking you to show them compassion and welcome them into your lives.

"It is hard for them to wait in a room or in an apartment, to wait to help them find a job, to help them start English classes," Qazi said.

The refugees are expected at O'Hare the first few weeks of February.

If you'd like to help with a home or resources, you can reach out to CIOGC on their website.