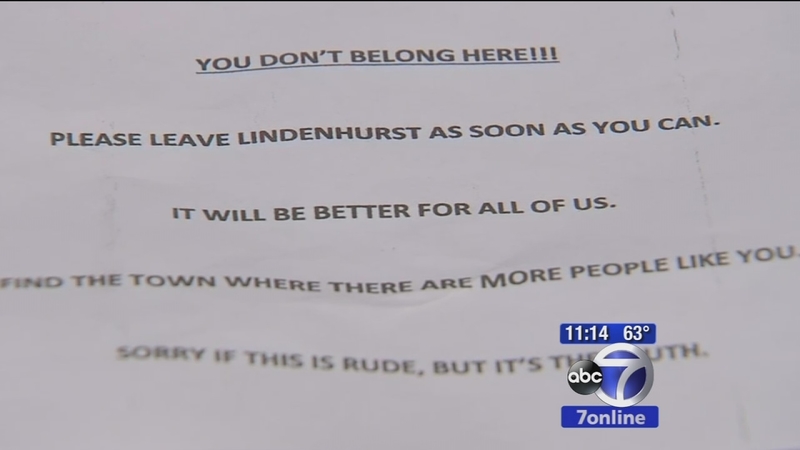 LINDENHURST, N.Y. -- An African-American family on Long Island got a nasty letter claiming that the Suffolk County Village of Lindenhurst is overwhelmingly white and "you don't belong here."

The racist words were anonymously penned to an African-American family in Lindenhurst, and they have quickly drawn outrage.

"The anger was there, the hurt was there, and then, of course, fear," said Darcell Copes, the letter's recipient.

It shattered the sense of peace Copes and her children thought they found in this Long Island community.

"Please leave Lindenhurst as soon as you can it will be better for all of us. Find the town where there are more people like you," the letter went on.

Darcell said her daughter first noticed the strange letter in the mail Thursday and frantically called her at work.

They then posted the message on Facebook asking for help and support, and called police who took immediate action. "There have never been any incidents for us no problems, no quarrels with anyone, so as I said, we are really taken aback because we have no idea where this is coming from," Copes said.

The original letter has been sent off for fingerprinting and detectives went door to door.

The Suffolk County Hate Crime Unit is also now involved, and Darcell said the support from others has been overwhelming. A little girl even came by to deliver flowers to the family.

County Executive Steve Bellone responded to the letter in a statement calling the person who wrote the letter to Copes a "coward who committed a hate crime against an innocent family."

"There is no place for intolerance in Suffolk County. I know the Suffolk County Police Department will do everything possible to solve this hate crime, out you and see you punished," it said. "I stand together with all Lindenhurst residents who decry this act of hatred. This community and all of Suffolk County are better than that."

Now holding onto hope those responsible will be caught, Darcell has a return message for them.

"Sometimes you have a preconceived idea of how a person is just because you don't know them. You don't know how they live, you don't know what they believe," Copes said. "I'll continue to pray for you and you need to get out and meet people."

In a written statement, Lindenhurst Village officials say they "Stand in solidarity with residents in declaring there no room for intolerance or hatred in this community."