Teen on trial for parents' murders; sister testifies about other brother: 'He acted like our parents loved us more' 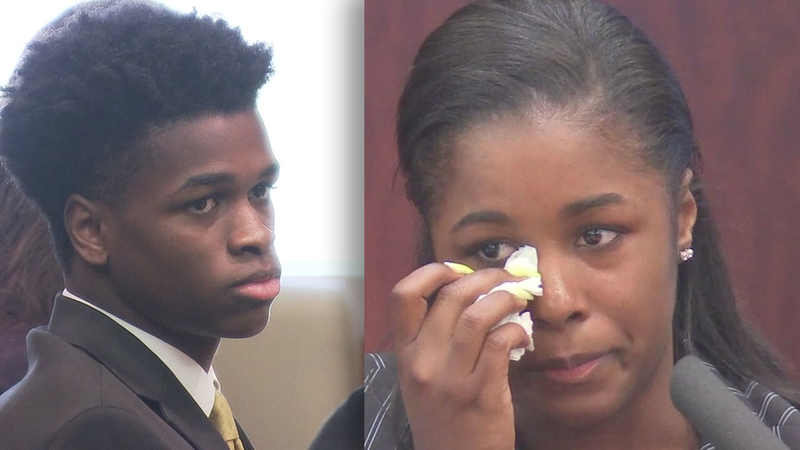 HOUSTON, Texas -- A.J. Armstrong's bid to clear his name is heading for closing arguments after his legal team rested its case Tuesday.

On day 11 of the double murder trial, the defense brought the teen defendant's sister, Kayra Armstrong, to the stand. It was expected that members of his family would testify on his behalf as character witnesses this week. But, Kayra's testimony was significant because she hadn't spoken publicly about her older brother, the murder of her parents from 2016, or the fact A.J.'s lawyers are attempting to pin the killings to their brother, Josh Armstrong.

According to investigators, their parents and respected community members, Antonio and Dawn Armstrong, were shot in the bedroom of their Bellaire-area home in July 2016. At the time of the late night murders, A.J. and Kayra were also inside the home. Kayra, who was 14 years old at the time, was asleep in her room when the shots rang out. A.J. called police when he reportedly found his parents' bodies.

A.J., who was 16 years old at that time, was ultimately suspected of the shootings and was taken into custody that night. A.J. was later certified to stand trial as an adult.

A.J. claimed an intruder committed the murders, but the home security system indicated no intrusion around that time. It's based on this that defense attorneys suggested Josh, the older sibling, as a possible suspect. Josh moved out of the home shortly before the killings.

During questioning Tuesday, Kayra was asked to describe Josh and his interactions with Antonio, who was not his biological father.

"He was there, but he wasn't there. He was distant. He acted like he was the black sheep of the family. He acted like our parents loved us more, because we were biologically related to both of them," Kayra stated, adding the two had a conflict.

Kayra also mentioned Josh had been doing drugs to the point that "he stopped caring about things like his appearance or getting haircuts."

In contrast, Kayra described A.J.'s relationship with his parents as normal, despite typical child-parent issues. Kayra confirmed that A.J. was having trouble with grades at Kinkaid in the months leading to the murders, as expressed earlier in the trial. However, she recalled A.J. being excited about starting his new school, Lamar High School.

Kayra was asked to recall her home's security system and the day of the murders. She revealed that their home welcomed a lot of people from time to time, entering and exiting through the garage.

"Anyone and everyone my parents knew" would come by, she said. Kayra also revealed there were problems with the alarm system at the house.

"Sometimes the alarm would set when a door is still open. Or sometimes, it would go off unexpectedly. It was really finicky," she said.

On the day of the murders, Kayra told jurors about heading home after several days with her grandmother and getting picked up by A.J., who appeared upbeat.

At home, Kayra spent time with Dawn before heading to bed. The next moment she would be awake was when A.J. came to her second floor bedroom and told her to come out of the house with him.

She recalled being half-asleep and not really processing what was going on despite the initial police presence. She also testified to seeing Josh arrive at the house and describing him as smelling of weed and acting like he was high. A.J. acted "a little concerned," she said.

But, she remembered seeing her dad, who was wounded but quickly fading, being brought out of the house on a stretcher. An emotional Kayra told jurors she was crying at this sight and added not seeing her mother's body. She said she was later interviewed by police and released to her grandparents.

Kayra testified that Josh had become violent and used more drugs in the months following the killings. She said he was hearing "demonic voices" and had mixed personalities.

Winston, who also worked in Antonio's gym, testified the business was burglarized 12 days after the murders, as defense attorneys showed surveillance video of the break-in. According to the aunt, the alarm wasn't activated, and the video showed two men in hoodies searching for something specific.

The video showed the burglars settle for a computer before walking out. A.J.'s attorneys pointed out their client was detained in juvenile jail when the burglary happened.

Winston said the gym was never burglarized in the past.

Winston was then cross-examined by the prosecution, which brought up for the first time during trial a sexual assault that A.J. was accused of. Though it was mentioned briefly, Winston recalled the alleged victim, a friend of A.J., lying about the incident.

Following this testimony, the defense rested and the prosecution was given a chance at rebuttal, calling on three witnesses.

Among the rebuttal witnesses was a Harris County Sheriff's Office tactical unit supervisor, who explained the inmate phone system. Accompanying the testimony, the prosecution played outgoing phone recordings of A.J. while he was being held in jail in 2017. In the recordings, A.J. asks to speak with an "Izzy," who talks out his decision regarding "Kate," who most likely refers to the teen's girlfriend, Kate Ober.

A.J. states in the recording that he wants to call Kate "and let her have it." In response, the person on the other end cautions, "You may want to ostracize her but we'll need her in trial."

A.J.'s grandmother, Kay Winston, who is also Antonio's mother, was called up next. She was slated among the defense witnesses but never called up until prosecutors rebutted. She was asked about the moment she arrived at her son's home on the night of the shootings.

"Do you remember when you got to the house, you told detectives, 'Let me tell you something, if A.J. done did something like this, it's got to be drug-related'?" the prosecution asked, to which Kay agreed.

When the defense cross-examined her, though, she said, "I know he didn't do it."

Closing arguments are expected to begin Wednesday at 10:30 a.m.

In all, the defense called up nine witnesses, compared to the 28 by the prosecution before A.J.'s team rested. A.J. was not called to the stand at any point.

Since the murders nearly three years ago, A.J.'s relatives have largely defended him through his multiple months in juvenile jail and the mental anguish of awaiting trial.

On Monday, Armstrong's lawyers brought up a former gym client of Antonio and A.J.'s girlfriend.