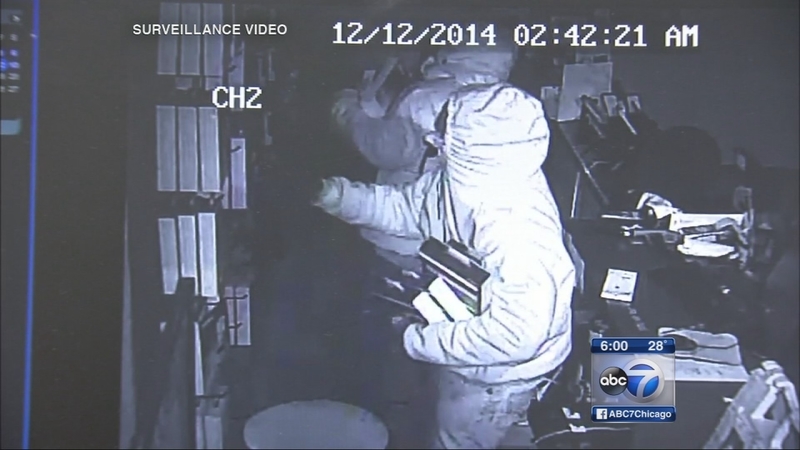 CHICAGO (WLS) -- Burglaries at four cell phone stores in Chicago's Irving Park and Albany Park neighborhoods in the past month may be connected, police said.

The thieves broke into the businesses by throwing a brick through the front window or prying open a back door, police said. The suspects stole cell phones, cash and other merchandise.

In one case, in-store video shows the crooks using a crowbar to enter through the back of the My Wireless Boost Mobile store in Albany Park at 1:11 a.m. last Friday. After attempting to disable the alarm and nearly electrocuting themselves they head for the phones, stealing about $4,000 worth of equipment plus $100 in cash.

Ordaz and IT specialist Andrew Saucdo subsequently fortified the backdoor but the crew came back, this time at about 7:20 a.m. Tuesday morning. They broke down the door and were armed with pillow cases for the loot.

"It's just sad, that people are just going by and stealing from a business that's bringing up the neighborhood," Saucdo said.

In both cases, police took about 45 minutes to respond. In a business community alert, CPD says the break-ins are part of a recent rash of similar jobs in Albany Park. Ordaz says he's building a business to serve a hard working neighborhood with potential.

But repeated scenes like this are troubling for more than just the lost merchandise.

"What about if I would've have been here? If police would have taken the 44 minutes to get to the store and I would've been held up?" Saucdo said.

Anyone with information regarding the burglaries should contact Area North detectives at (312) 744-8263.