Mayor Lori Lightfoot was with Scott Wednesday, but said she will not be quarantining
WLS
By Jessica D'Onofrio and Craig Wall 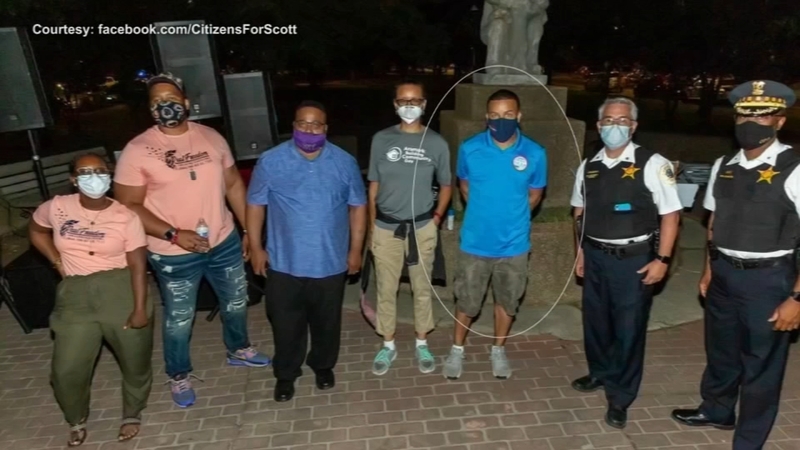 Lightfoot appeared with Alderman Scott on Wednesday. Since then, she has tested negative for the virus and has no plans to self-quarantine.

Thursday night, the West Side alderman, and chair of the Education Committee, confirmed he tested positive for COVID-19.

"On Friday July 31st, the 24th Ward hosted, in conjunction with the 10th and 11th police district, our Bike the Boulevard event to encourage safe and positive community activity. One of the resources provided to the community and myself was COVID testing on-site. Today, I received my test results and they came back positive," Scott said in a statement.

The mayor's office says all participants were wearing masks and practicing proper social distancing for the duration of Wednesday's news conference.

Scott told ABC7 he's asymptomatic and is currently quarantined at home in his basement. His wife and three children have also been tested and are awaiting results.

Scott says he was tested last Friday at a bicycling event in his ward where tests were offered. Scott was seen wearing a mask while snapping photos with some of the 200 people who attended.

Lightfoot had a public event scheduled for Thursday afternoon at 3:30 p.m. but it was canceled for unknown reasons.

A spokesperson for the mayor's office said told ABC7:

"We have learned that Alderman Michael Scott, who was an attendee at yesterday's press conference, has tested positive for COVID-19. The Alderman was asymptomatic and is following all of the necessary health protocols. In coordination with the Chicago Department of Public Health, we are reaching out to all those who interacted with Alderman Scott to provide guidance on how they can get tested and any other health and safety measures they should take at this time. We will also be conducting a deep clean of the press conference space and the additional spaces where the Alderman interacted in the building.

Mayor Lightfoot has been tested for COVID-19 since yesterday's press conference, and her results have come back negative. She will continue to follow the guidance of the Department of Public Health over the course of the standard 14-day incubation period. She will not be quarantining given that she was not in close proximity with the Alderman for an extended period of time, per CDPH and CDC guidelines on quarantining . All participants were wearing masks and practicing proper social distancing for the duration of yesterday's press conference."

Cook County Commissioner Dennis Deere, seen in one of the photo, said he is also in quarantine.

"Although we all had face masks on and I have no symptoms, I am actively quarantining," Deer told ABC7 in a statement Thursday night.

Deer said he tested negative for COVID-19 a week ago and plans to get tested again "just to be on the safe side."

"I literally found out this evening," he said Thursday.

A CPS spokesperson said in a statement, "Dr. Jackson was not in close proximity with Ald. Scott for an extended period of time, and based on public health guidance quarantine is not recommended in this instance. Additionally, all participants at Wednesday's press conference wore masks and practiced proper social distancing."

Gov. JB Pritzker weighed in on the alderman's positive test, saying "I want the mayor to be safe and healthy."

Lightfoot's negative test likely would not detect if she contracted the virus, health officials say.

"The best time to test is between days five and nine. You're the most likely to pick up infection at that point," said Dr. Emily Landon, University of Chicago Medicine infectious disease specialist. "However, people can still develop symptoms even after that if their test is negative at that time."

In May Pritzker self-quarantined for 14 days and conducted his daily news conferences virtually after a member of his staff tested positive.

But he would not second-guess the mayor's decision.

"She has a doctor. I'm not going to make advice here about that," the governor said. "Look, I just want people to do the right thing and, you know, keep everybody around them safe and healthy. And of course, I want the mayor to be safe and healthy. So whatever the best advice is that she's been given I know she will follow."

Contact tracers will likely have to look at earlier events to find out where Scott caught the virus.

"He could not have picked up the virus at the event and then tested positive immediately afterwards. It takes upwards of five days for people to develop a positive test," Landon said.