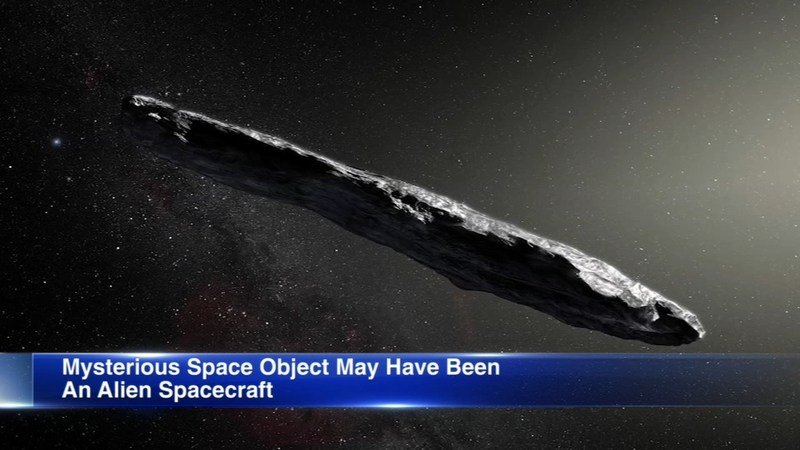 Interstellar object may have been an alien probe, Harvard paper argues

A mysterious cigar-shaped object spotted tumbling through our solar system last year may have been an alien spacecraft sent to investigate Earth, astronomers from Harvard University have suggested.

The object, nicknamed 'Oumuamua, meaning "a messenger that reaches out from the distant past" in Hawaiian, was discovered in October 2017 by the Pan-STARRS 1 telescope in Hawaii.

Since its discovery, scientists have been at odds to explain its unusual features and precise origins, with researchers first calling it a comet and then an asteroid before finally deeming it the first of its kind: a new class of "interstellar objects."

A new paper by researchers at the Harvard Smithsonian Center for Astrophysics raises the possibility that the elongated dark-red object, which is 10 times as long as it is wide and traveling at speeds of 196,000 mph, might have an "artificial origin."

"'Oumuamua may be a fully operational probe sent intentionally to Earth vicinity by an alien civilization," they wrote in the paper, which has been submitted to the Astrophysical Journal Letters.

The theory is based on the object's "excess acceleration," or its unexpected boost in speed as it traveled through and ultimately out of our solar system in January.

"Considering an artificial origin, one possibility is that 'Oumuamua is a light sail, floating in interstellar space as a debris from an advanced technological equipment," wrote the paper's authors, suggesting that the object could be propelled by solar radiation.

The paper was written by Abraham Loeb, professor and chair of astronomy, and Shmuel Bialy, a postdoctoral scholar, at the Harvard Smithsonian Center for Astrophysics. Loeb has published four books and more than 700 papers on topics like black holes, the future of the universe, the search for extraterrestrial life and the first stars.

The paper points out that comparable light-sails exist on Earth.

"Light-sails with similar dimensions have been designed and constructed by our own civilization, including the IKAROS project and the Starshot Initiative. The light-sail technology might be abundantly used for transportation of cargos between planets or between stars."

In the paper, the pair theorize that the object's high speed and its unusual trajectory could be the result of it no longer being operational.

"This would account for the various anomalies of 'Oumuamua, such as the unusual geometry inferred from its light-curve, its low thermal emission, suggesting high reflectivity, and its deviation from a Keplerian orbit without any sign of a cometary tail or spin-up torques."

'Oumuamua is the first object ever seen in our solar system that is known to have originated elsewhere.

At first, astronomers thought the rapidly moving faint light was a regular comet or an asteroid that had originated in our solar system.

Comets, in particular, are known to speed up due to "outgassing," a process in which the sun heats the surface of the icy comet, releasing melted gas. But 'Oumuamua didn't have a "coma," the atmosphere and dust that surrounds comets as they melt.

Multiple telescopes focused on the object for three nights to determine what it was before it moved out of sight.

Going forward, the researchers believe we should search for other interstellar objects in our sky.

"It is exciting to live at a time when we have the scientific technology to search for evidence of alien civilizations," Loeb wrote in an email. "The evidence about Oumuamua is not conclusive but interesting. I will be truly excited once we have conclusive evidence."

Is this just fantasy?

Other mysteries in space have previously been thought of as signs of extraterrestrial life: a mysterious radio signal, repeating fast radio bursts and even a strangely flickering star, known as Tabby's Star.

The mysterious radio signal was later determined to be coming from Earth, the repeating fast radio bursts are still being investigated, and new research suggests that Tabby's Star is flickering because of dust -- rather than being an alien megastructure.

So what does that mean for 'Oumuamua?

Jackson published a paper in the Monthly Notices of the Royal Astronomical Society in March that suggests that 'Oumuamua came from a binary star system, or a system with two stars.

Jackson said the spectral data from 'Oumuamua looks like an asteroid or a comet, while that of a solar sail would look very different. The new paper proposes that the sail has been coated in interstellar dust, which obscures its true spectral signature.

"Any functional spacecraft would almost certainly retract its solar sail once in interstellar space to prevent damage," Jackson said. "The sail is useless once away from a star so there would be no reason to leave it deployed. If it was then deployed again on entering the solar system it would be pristine. Even if it was left deployed the dust accumulation would be primarily on the leading side like bugs on a windshield."

'Oumuamua also travels in a complex tumbling spin, but a functioning solar sail would have a much smoother path and obvious radiation-driven acceleration, Jackson said. Even the spinning motion of a damaged solar sail would be far more strongly influenced by the radiation forces than seen, he explained.

The solar sail would also be thinner than the authors of the new paper describe, he said.

"The sail on IKAROS is 7.5 micrometres thick with a mass of only 0.001g/cm2, 100 times lower than their estimate," Jackson said. "While a combined spacecraft and sail could have a higher net mass the sail itself needs to be extremely light. That would also significantly change their estimate for how far it could travel before falling apart -- though as I said, I doubt any functional craft would leave its sail deployed in interstellar space."

Solar sails also can't change course after being launched, so if 'Oumuamua was truly a solar sail, it would be traceable back to its origin. So far, there is no obvious origin for 'Oumuamua.

"Beyond that, it becomes difficult to trace because of the motion of the stars and any hypothetical alien civilisation would face the same issue in charting a course that long in the first place (aside from arguments about whether they would want to launch a craft they knew would not reach its destination for many millions of years)," Jackson said.

Concerning 'Oumuamua, there is little evidence because astronomers weren't able to observe it for long, which opens it up to speculation in the name of science.

"The thing you have to understand is: scientists are perfectly happy to publish an outlandish idea if it has even the tiniest 'sliver' of a chance of not being wrong," astrophysicist and cosmologist Katherine Mack tweeted. "But until every other possibility has been exhausted dozen times over, even the authors probably don't believe it."

But it's important to distinguish that the researchers who wrote the new paper have expertise in solar sails, so they're suggesting that 'Oumuamua could be like a solar sail, said Coryn Bailer-Jones of the Max Planck Institute for Astronomy. Bailer-Jones' paper on possible origin sites for 'Oumuamua was accepted by the Astrophysical Journal in September.

"Aliens would only come into all of this if you accept their assumption (and that's what it is; it doesn't come from the data) that 'Oumuamua is sail-like, and also assume nothing like that can be natural," Bailer-Jones wrote in an email. "In fact, they only mention the word 'alien' once, when they mention in passing that 'Oumuamua might have been targeted to intercept the solar system.

"I have no problem with this kind of speculative study," Bailer-Jones added. "It's fun and thought-provoking, and the issue of whether there is alien life out there is really important. But the paper doesn't give any evidence for aliens (and the authors don't claim that, I should note.)"