Salvage for sale: Potentially dangerous cars may have hidden history 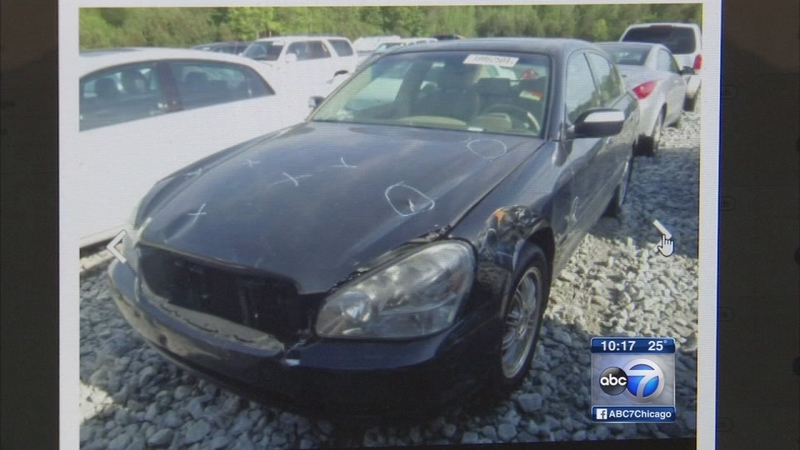 CHICAGO (WLS) -- You could be driving or buying a dangerous vehicle and not even know it. Auto experts estimate that important information has been hidden or altered from documents connected to more than 30,000 vehicles in Illinois and Indiana.

The ABC7 I-Team found cars and trucks all over the Chicago area that were advertised as being in excellent condition, but many ads don't mention that the vehicles have been in serious accidents or deemed a total loss. They may not want you to know there's "salvage for sale."

"And they actually folded this document back and forth and rubbed it and you can see they removed the 'salvaged'," said Sgt. Elmer Garza, an Illinois Secretary of State officer.

Sgt. Garza investigates 200-300 cases a year of reports of altered or phony titles.

"If you looked at the report, it would reflect that there was never an Alabama title issued for this vehicle," Garza said.

"This is a paper-based scam that has real physical consequences. Con men are taking branded titles - salvaged, flood - altering those documents and moving them to other states," said Chris Basso, CARFAX.

Investigators say many of the titles in question belong to vehicles which may have looked like a good deal to potential buyers.

"An alarming number of ads that say the car is in beautiful condition, it is a one-owner car, no accidents, no damage. And if the serial number is there for me to do some investigations with, I am finding these cars have salvage, rebuilt titles, they have been in serious collisions, they have had multiple owners," said Greg Jacobi, an auto industry expert.

Jacobi buys and sells used vehicles and showed us dozens of online postings where cars are described as "like new" and "flawless", but a closer look shows problems which could put you at risk.

"Car has had three previous owners, structural damage reported and airbags have been deployed," Jacobi said.

Jacobi and Secretary of State's police helped the I-Team use VIN numbers to run vehicle history reports on CARFAX and AutoCheck. We found things that would have most potential buyers bolting.

Sometimes all you have to do is Google the VIN to reveal that some of the cars were recently sold at salvage auctions.

The I-Team found these two ads for a Pontiac Vibe and a Dodge Grand Caravan. Both say the vehicles are in "excellent condition."

But CARFAX and AutoCheck reports show the Vibe was recently sold at a salvage auction and has a salvaged title in Wisconsin. It was called a "total loss" by its insurance company. And records show the Caravan is a "total loss vehicle."

Both the Caravan and the Vibe were parked in Mohammad Kashkouli's driveway on the city's Near West side.

ABC7's Jason Knowles says: "Both of these cars on your property have the same history."

Kashkouli says: "This one is mine, if they want to buy the car they should show it to a mechanic first ."

He said he was selling the Vibe for a friend and doesn't own it. Then he showed us the Illinois title for the Caravan, which doesn't indicate the "total loss," that according to records, was recorded in Wisconsin in August. The Secretary of State's office says a "total loss" from another state may not always be shown.

Knowles: "You are saying you didn't know about the damage?"
Kashkouli: "No not really, the only thing I saw was here in the front."

Knowles: "Would you buy it now knowing that?"
Kashkouli: "I would think it twice."

Besides internet searches, you can shop at a used car dealer licensed with the state and get the car checked by a mechanic before buying.

In some cases, you may get a great deal buying a rebuilt car, but unless you're told upfront and know exactly who repaired it, you may want to steer clear.

"The parts, the labor, the knowledge that you need to rebuild today's cars - I wouldn't put my family in a car that had a salvage title. Not on your life," Jacobi said.

When buying used you should match the VIN on the title to the one on the vehicle, and also match the seller's name on the title. You can also get a signed bill of sale with detailed contact information.

According to Illinois law, people can advertise rebuilt and salvage cars without a warning, but they must give the buyer a disclosure form at the time of the sale.

Spotting a "washed title" vs a real title:
-Look for color fibers in real titles
-Photocopied titles will usually say "VOID" or the fibers will not be bright
-In Illinois, hold your finger over Abraham Lincoln it is heat sensitive and will change colors.

More on researching vehicles:
- CARFAX and AutoCheck. People should check both as sometimes one service might have more crucial info that the other doesn't.
- National Motor Vehicle Title Information System
- Google the VIN (Free)