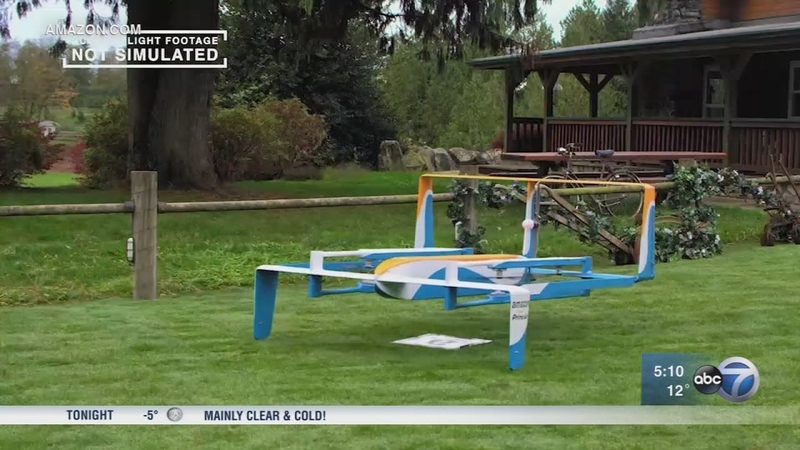 WASHINGTON (WLS) -- Amazon made its first successful commercial drone delivery to a farmhouse in England Dec. 7.

Smartphones disrupted several industries - music, books and television. Now, Amazon wants to totally change the way we shop and get our items.

The company released video of a delivery in their beta-testing experiment. But will this really work in cities?

A custom drone rises from the end of a fulfillment center assembly line, payload - an Amazon Fire stick and bag of popcorn.

A delighted resident of Cambridgeshire, England, retrieves his package from click to delivery, Amazon claims, Prime Air gets Richard his wares in 13 minutes.

"They pulled off a really excellent demonstration, the proof now is in expanding it," said Professor Joe Schwieterman.

The e-commerce behemoth plans to do that by refining a system that bypasses the trucks and people it takes to normally get goods from factory to farmhouse. The drones fly below 400 feet. But that is just one regulation industry analysts say must be thought through for all the implications.

"The public wants it. We know it is cost effective, but there are skeptics, governments, issues about drones and privacy," said Schwieterman.

Currently, flying drones commercially in the United States requires an FAA license, and an operator has to physically be able to see the drone while it's flying. Some drone pilots though say we're just three to five years away from massive commercialization.

"There are drones out there with obstacle avoidance, so they won't run into things, but for the scope of say, delivering something, without even watching the drone and getting it there, you know, I think the technology probably has to be improved greatly," said Bob Warfel, drone pilot, Sugar Grove, Ill.

Roughly two-thirds of Americans live in urban environments, and that's where the money is to be made.

"The FAA I think feels it coming," said Warfel. "It's like driverless cars. I think they feel they can't simply stop and say no, they have to make arrangements to help this evolve naturally."

Technology is improving and costs are going down.

Amazon is one of six companies working with NASA and the FAA on developing an air-traffic management system to integrate autonomous drones into the national airspace by 2019.

Amazon, with drones, aims to make deliveries in 30 minutes or less. Packages must weigh five pounds or less and can only be delivered during the day and in clear weather. The Seattle-based company plans to expand the trial to hundreds of users.