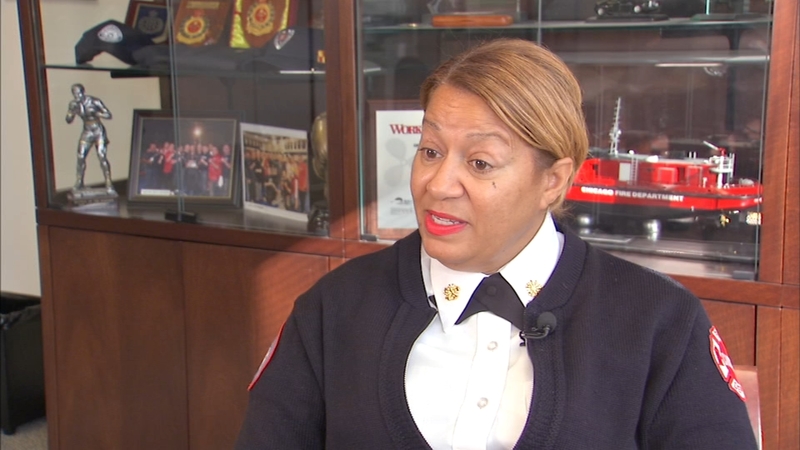 CHICAGO (WLS) -- Annette Nance-Holt has had a busy week since she was appointed First Deputy Commissioner of the Chicago Fire Department. She is the first black woman to hold the position.

Nance-Holt's career started in corporate America as a tax accountant. But when friends started training for the fire academy, so did she.

Her first assignment was with all male, all white firefighters. Throughout her 29 years on the job, she has witnessed CFD address several class action lawsuits and some ugly incidents regarding racism and sexism. Nance-Holt said she sees the department evolving.

"I think we've evolved a lot from when I came on the job. When I came on the job it was quite different to me, QUITE different," she said. "And I went to a firehouse where there were no firefighter women. I was the first one to go there. And, uh, I did not feel that warm welcome when I went there."

The appointment is also personal for Nance-Holt as her CFD family was there to support her after her son, Blair Holt, was killed while shielding a friend from gunfire aboard a CTA bus after school.

"I had a lot of reasons to give up in life, and I didn't, um but I think that this was a blessing in disguise because I've always been a person that believed in helping people and this is where God led me," she said.

Nance-Holt just finished her master's degree, which she began working on when son Blair was young. She took a break and intended to go back and finish it once he got older, but took some extra time to return to it after his death. Years later, she went back to finish in his honor.
Report a correction or typo
Related topics:
chicagoteen shotteen killedchicago fire departmentwomen
Copyright © 2021 WLS-TV. All Rights Reserved.
More Videos
From CNN Newsource affiliates
TOP STORIES