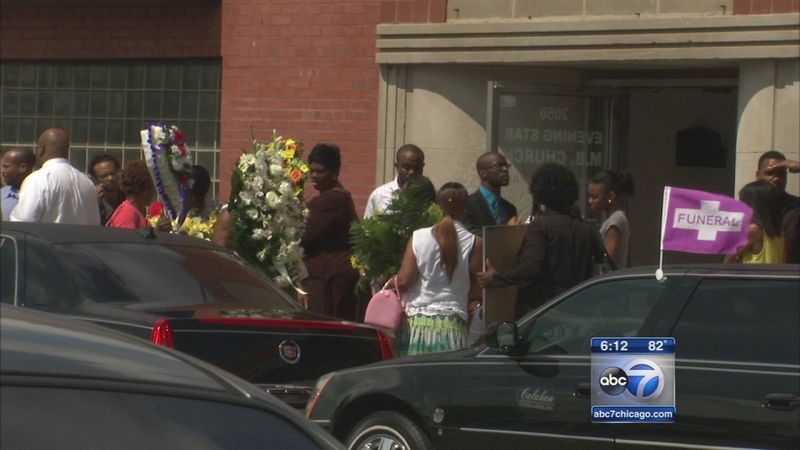 CHICAGO (WLS) -- A funeral was held Saturday for 9-year-old Antonio Smith, the Chicago boy shot to death last Wednesday. Nobody is in custody. The family and community want peace and justice.

Friends and relatives surrounded a grieving mother as she left the funeral service for her 9-year-old son. The Evening Star Baptist Church was filled to capacity with mourners remembering the short life of the boy who sang here with the church choir.

Antonio Smith was shot and killed Wednesday afternoon in the back yard of this residence in the Grand Crossing neighborhood.

"Just a great kid, just a tragedy, as everybody knows. You shouldn't have to bury your kid and our church gave him a great homegoing," said churchgoer Bridgette Jackson.

"It was tough looking at this little boy in that casket dressed in white, it was real tough," said activist Andrew Holmes.

The shooting has gotten a lot of attention in the community and prompted several religious leaders to offer reward money for information that leads to the gunman.

"This kid, at 9 years old, his life is just ended, he will never graduate from 8th grade, he'll never go to high school, he'll never get married, his mother will never have grandchildren by him," said friend Rebecca Saekey.

Among those mourning with the family was Ronald Holt, whose foundation supports families of young murder victims after his son Blair was killed on a bus home from school in 2007. Holt met with Antonio Smith's mother earlier this week.

Sources say Police may be closing in on a suspect in the murder, however at this point they are still looking for witnesses and have no one in custody.