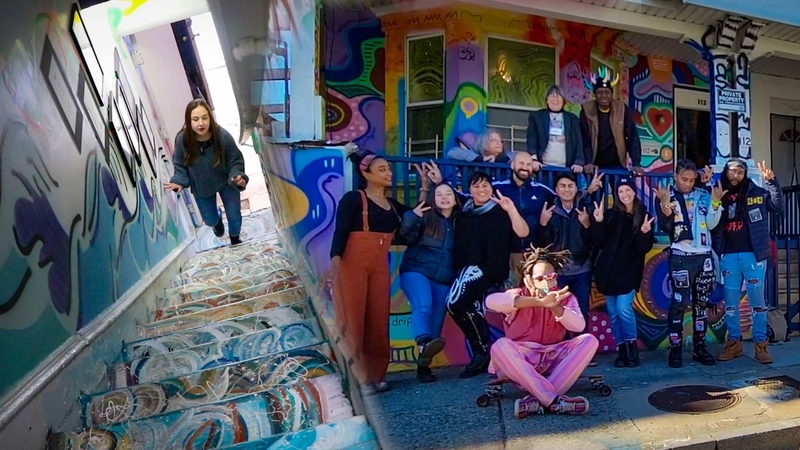 ATLANTIC CITY, New Jersey -- "Atlantic City should be somewhere that resonates with people as a place to come for the arts," said Kate O'Malley. "So much of this kind of incredible diversity and creativity that exists here is worth it and should be capitalized on."

O'Malley is the newly-tapped Operations Manager of the Atlantic City Arts Foundation. Their program, ARTeriors, seeks out vacant or in-transition properties and uses them as a temporary canvas for art installations.

One of their transformations took place in 2015 on Tennessee Avenue in Atlantic City. Beth and Kurt Kwart, a couple who had purchased property on the adjacent block, were inspired by what they saw there.

"We were hopeful that the area would turn around," said Beth. "And then we went to that ARTeriors event and it was just incredible to see all the amazing art that came through in that abandoned building."

The Kwarts were inspired to acquire more properties in Atlantic City as a result. Such is the case with the three-story house at 112 South Ocean Avenue, which they temporarily donated to the Atlantic City Arts Foundation as a base for the 8th ARTeriors installation.

"It was the worst street in the area. There were a lot of people who would come and they would put in parolees and Megan's Law offenders and put them in rooms in all the individual houses," said Kurt. "So, we refuse to do that. Eventually, we were able to turn one into an Airbnb, and it's just continued to grow from there."

The plan is to make the Ocean Avenue property an Airbnb as well. But before the home remodeling begins, local artists had a chance to make a statement in each of the various rooms.

"Because the house was fully furnished, the artists had the opportunity to take from the house and use pieces that were already there for their installation," said O'Malley.

12 juried artists and six volunteers let their imaginations run wild. They painted a monstrous face on an average living room couch, turned the kitchen into an indulgent disco, built a display out of waste collected from the beach, and more.

"You just throw a bunch of artists in a place and we're like alright, yeah, give us three days we got this," said Randi Meekins, an artist from Brigantine, New Jersey.

Visitors will have a chance to tour rooms like Meekins' black light bathroom at the Atlantic City property from now until November 21st. The doors will be open from 11:00am to 5:00pm or by appointment.

"I think part of what makes the public art projects that we do so unique is that it's temporary and it's a moment where we all came together and created something amazing for our community," said O'Malley. "Then it's gone. So come see it while it's here."