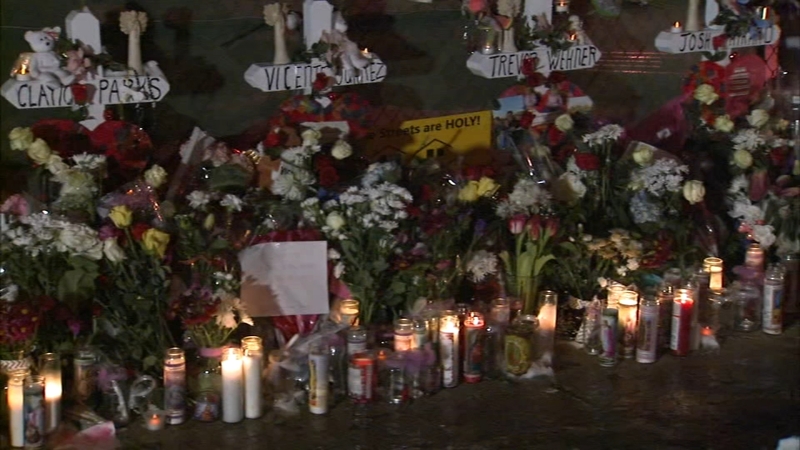 About a dozen employees walked back through the front doors of the manufacturing company, just days after a gunman shot and killed five of their fellow employees.

Some employees said they weren't ready to come back to work Monday. The company said they tentatively plan to resume production next Monday. Employees who came to work today were given counseling and support.


The innocent victims have been identified as Trevor Wehner of Dekalb, Vicente Juarez of Oswego, Clayton Parks of Elgin, Josh Pinkard of Oswego and Russell Beyer of Yorkville.

Wehner was a college student at Northern Illinois University. The four others were all fathers, now remembered as hard workers and dedicated family men.

"There will be time for discussions, for solutions to the all-too-common tragedy of gun violence in our community and across the nation. Today is not that day," said Chuck Adams, executive director of Indivisible Aurora.

Police identified the gunman as 45-year-old Gary Martin, who they said was being fired from his job at the warehouse after 15 years.

Hundreds of people showed up to pay their respects to the victims and their families.

"We are strong and we all come together if we need each other for support," said Ashley Carachure, a family member of a Pratt employee.

Carachure said her uncle works at Pratt and was at the facility at the time of the shooting. Her family feared he would not make it out alive

Now she wants to be part of the community support system to help the families.

"If it was our uncle, I am pretty sure we would want everyone to support us too" Carachure said.

Plant manager Josh Pinkard of Oswego, was one of the employees killed. His wife, Terra, says she received a text message from Josh at 1:24 p.m. on Friday that said "I love you, I've been shot at work."

She posted the message on Facebook, writing in part, "The man who was dying and found the clarity of mind for just a second to send me one last text to let me know he would always love me. This unbelievable person was robbed from us."

Pinkard is asking people to keep praying for her so she can somehow put one foot in front of the other.

"I know he loves his wife. He always talks about his wife," said Blanca Torress, former coworker of Josh Pinkard's.

"If you didn't know him, you knew his brother, or his mom, or any of his family members, so it's really tough, especially when you're a small town," said Brian Dallinger.

Six police officers were also hurt Friday. Five of them were shot and the sixth suffered a minor injury.

Four of the five officers who were shot have been released from the hospital. It's unclear when that fifth officer will be released, but they are all expected to be okay.

"I hope that we will see over time that these deaths and countless others like them around the country will not end up in lives lost in vain," said Rep. Bill Foster (D-IL 11).

The city has started a GoFundMe page to raise money for the victims' families.

Details about funeral services were starting to be released on Monday.

A visitation for Wehner, who started his internship on the day of the shooting, will be held 2 p.m. to 7 p.m. Wednesday at Gabel-Dunn Funeral Home Ltd., 333 W. Church St., Sheridan. Funeral to begin at 7 p.m. at the funeral home. Afterwards, visitors are invited to the Sheridan Fire Department for further celebration of Trevor's life.

A spokesperson for Mueller Water products released a statement Monday saying, "Mueller Water Products and the Henry Pratt community continue to grieve from the tragic shooting that took place on Friday. The lives lost were not only our employees, but also fathers, husbands, grandfathers, brothers, sons and our friends. Their loss has left a huge void in us all.

We are comforted that our colleague receiving care for his injuries has returned home from the hospital to his family. We admire his bravery in this impossible situation.

We are committed to ensuring Mueller facilities are safe places to come to work to every day. In the days, weeks and months ahead, we will be reviewing what happened, our security protocols at our different locations and assessing how we can enhance safety.
Henry Pratt employees are invited to the facility on Monday as an opportunity to come together and support each other. Members of the Mueller leadership team will be at the facility, and counseling will be available on-site through the week.

For the remainder of the week, our doors will be open for any employees who would like to spend time with their colleagues or simply return to a familiar environment. We will not be returning to full production this week. We tentatively plan to return to a normal schedule next Monday, and as those details are finalized, we will be communicating them directly with employees.

Victim and Family Support
Our leadership and HR teams spent the weekend reaching out to and meeting with the families of the victims to express our deepest condolences and support. Additional efforts to support them include:
Establishing a family support center in Aurora, where the families can go to be together during this difficult time.
Committing to cover the cost of the funerals, medical expenses of the victims and additional assistance to their families.

Putting plans in place to set up an employee support fund in the coming days; 100 percent of the proceeds will go directly to the families.

Employee Support:
As many Mueller Water Products employees in other locations across the country return to work on Monday with heavy hearts, we are offering all employees and their families the opportunity to participate in employee assistance programs. We are also providing grief counseling services in the locations most closely impacted by this tragedy."

Greg Zanis has been making crosses to remember victims of gun violence since 1996. He said putting five crosses up in his own town has been the hardest.
"I can't tell you how hard it is for me to live by the police station and see 50 squad cars go by and a big armored trucks and all these police cars from other cities coming to my town," Zanis said.
Report a correction or typo
Related topics:
auroraofficer injuredmass shootingshooting
Copyright © 2021 WLS-TV. All Rights Reserved.
RELATED
Aurora shooting victims: What we know
Aurora shooting: Victims remembered at vigil
Aurora shooting: Victims ID'd; shooter had gun illegally, just been fired
TOP STORIES
Waukegan HS on lockdown following threat on social media: officials
Oak Lawn woman wanted after skipping court over 'Maderna' vaccine card
No sign of Brian Laundrie as search enters day 5
Student reeling after 2 classmates killed; threats made against school
City wants 77% of eligible residents to start vaccines by end of 2021
Boppy newborn lounger pillows recalled after 8 infant deaths
Chicago holiday events returning in-person this year
Show More
Driver killed after car crashes into semi, catches fire: ISP
Chicago Weather: Chilly, breezy Thursday
'Mama, I got shot:' KY community reeling after teen killed at bus stop
'Unacceptable': IN teacher cuts student's hair without permission
Waves in Chicago, NW Ind. again expected to reach up to 16 feet
More TOP STORIES News