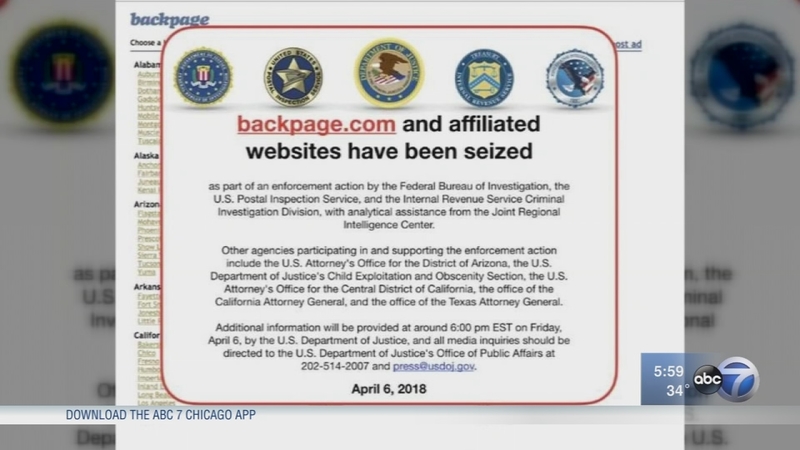 CHICAGO (WLS) -- A popular online sex marketplace has been seized by federal investigators.

The website Backpage.com has been under investigation for several years amid allegations it was used to facilitate prostitution and money laundering.

On Friday an electronic sticker was slapped onto the online classified ad site, stating it has been seized by the FBI, U.S. postal inspectors and the IRS.

Until this action Backpage.com had been the nation's second largest classified ad service; $135-million in income according to the most recent figures. Most of its income is generated by ads for sex services. Illinois is among the states lining up against Backpage.com, with Cook County sheriff Tom Dart leading a charge for the last decade to stop the website, saying it was a pimping service and a purveyor of child sex crimes.

Friday night Dart told the ABC7 I-Team he is "ecstatic that after many years a website involved with sex trafficking, child trafficking and prostitution has been shut down."

One lawsuit filed against Sheriff Dart by Backpage is still winding through federal court. But until Friday the website had continued to operate, shielded by free speech protections.

The Justice Department promised more information on this would be released Friday evening, but nothing came from from DOJ on possible charges or arrests. The online takedown notice did not detail the reason for the seizure but noted that Justice Department's Child Exploitation and Obscenity Section, as well as the offices of the Texas attorney general and California attorney general, were involved.