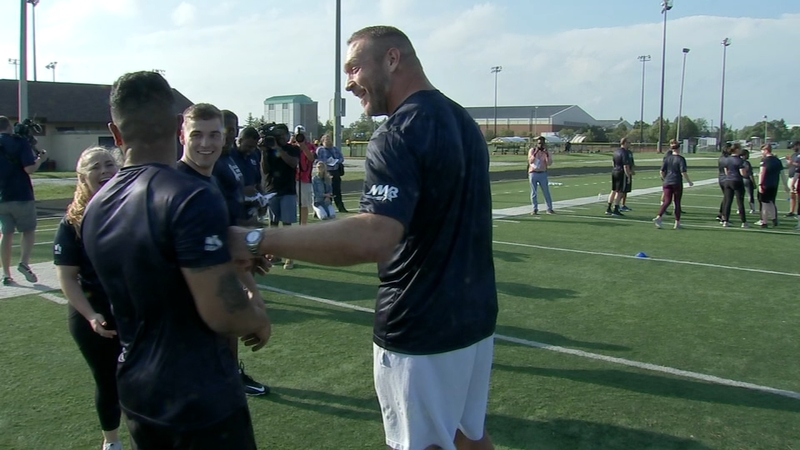 Urlacher talked about the event and also weighed in on the Bears -Packers season opener on Thursday night.

"It's cool to be our here and be a part of this, it's a neat event and I was telling someone I used to live right over here and I could hear them do their cadence in the morning," Urlacher said. So, it's nice to get a chance to be over here and hang out with them. I was a big fan of the military. My whole career. I used to get tickets every home game for some of the troops and stuff like that. It's just neat to hang out with them. I think they're having a good time. I think they are. It's just fun. They get a chance to go through some of the drills we did at the combine. I'm excited."

He also spoke about the upcoming Bears opener against the Green Bay Packers.

"The big deal with Green Bay is no one knows to expect from their offense," said Urlacher. "They haven't seen Aaron play yet in the system. It should be fun. I'm way excited about the Bears. They should be good on both sides of the football. I think the offense is going to take a big step this year. It's going to be hard for the defense to take a step forward because they were so good last year. Just maintain where they are at and have a really good season."
Report a correction or typo
Related topics:
sportsgreat lakeschicago bearsfootballmilitary7 on your sideline
Copyright © 2022 WLS-TV. All Rights Reserved.
7 ON YOUR SIDELINE
Fremd H.S. girls basketball team eyes 1st state title
Maine West Warriors on pace for another state run after undefeated season
Glenbrook South Titans set eyes on school record
Bloom High School's basketball team eyes championships
TOP STORIES
New details revealed in Wacker Drive police shooting
Free COVID test kits available for IL residents in these zip codes
Chicago snow totals: Lake effect snow pummels city, North Shore
Illinois change in 'felony murder rule' left some behind
Chicken wing prices rise weeks before Super Bowl
Former Alorton cop sentenced for collecting $60K in fraudulent pay
Pritzker on Van Dyke release: 'Justice system isn't always just'
Show More
Joni Mitchell joining Neil Young in protest over Spotify
Anti-Asian slur yelled at suburban high school basketball game
Beloved CPS music teacher's legacy to live on through scholarship
Stolen: The Unsolved Theft of a $3,000,000 Violin | Watch Trailer
$15K reward offered after teen killed in Noble Square shooting
More TOP STORIES News