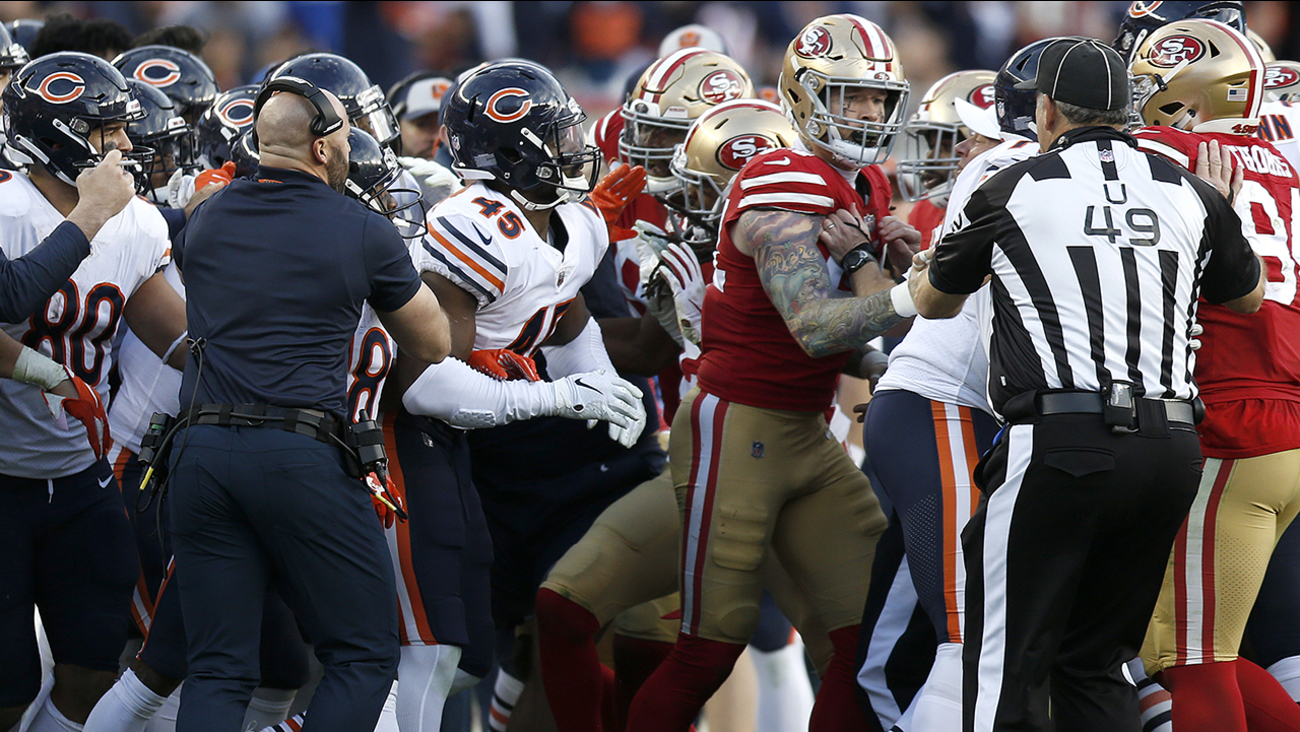 Coaches and officials try to separate Chicago Bears and San Francisco 49ers players during the second half of an NFL football game in Santa Clara, Calif., on Dec. 23, 2018. ((AP Photo/D. Ross Cameron))

When the melee ended following Harris' late hit in Sunday's 14-9 win for the Bears over the 49ers, three players were ejected and neither team was happy.

"These are my guys. I don't care at the end of the day what the deal is. You going to do all that, you let him go," Sherman said. "And it took too long for them to let him go. So I went in there to grab him and they continued to pull and drug and grab on me. I'm a grown man with kids. I don't have to care about any of that. At the end of the day, they're going to be punched for it."

The scuffle started after Trubisky scrambled on third down and went into a slide near the Chicago sideline. Harris came over from his safety position and hit Trubisky late, sending the quarterback's head into the ground.

The Bears (11-4) predictably took exception and got in Harris' face.

"I just saw Mitch's head hit the ground real hard. It was an unnecessary hit," receiver Anthony Miller said. "He already missed a couple of games because of a late hit. When I see that, it's dirty football."

The 49ers (4-11) predictably saw the play a different way with Harris saying there was no ill intent on the hit.

"You're playing full, you're playing all out, lights out every play and some of those plays might happen every now and then where, with new rules and how everything is, I feel like I tried to let up as much as I can," he said. "But it's not in my hands. It's in the refs' hands."

Harris was immediately surrounded by several Bears players, leading Sherman to come in the middle of it to try to get his teammate out safely. That led to the scrum where punches were thrown by players on both teams.

After a lengthy huddle by the officials and consultation with the replay center in New York, referee Alex Kemp announced that Sherman, Miller and Bears receiver Joshua Bellamy were all ejected.

Niners coach Kyle Shanahan gave Sherman a handshake after getting the news that his star cornerback would finish the game in the locker room.

"I just told him I appreciated how he battled today," Shanahan said. "I don't know what happened over there and Sherm, very clearly to me, was trying to get this brother's back and I love for guys to do it as much as they can."

Trubisky said he felt the same way about his teammates, who stood up for him following the hit.

"It didn't surprise me," he said. "I saw exactly what I knew. My teammates had my back all the way, which is awesome to see. We just have to have my back and be smart as a team because we can't afford to lose two guys like that."
Report a correction or typo
Related topics:
sportssan francisco 49erschicago bearsfootball
Copyright © 2022 by The Associated Press. All Rights Reserved.
TOP STORIES
New details revealed in Wacker Drive police shooting
Free COVID test kits available for IL residents in these zip codes
Chicago snow totals: Lake effect snow pummels city, North Shore
Anti-Asian slur yelled at suburban high school basketball game
Beloved CPS music teacher's legacy to live on through scholarship
Stolen: The Unsolved Theft of a $3,000,000 Violin | Watch Trailer
$15K reward offered after teen killed in Noble Square shooting
Show More
Owner of bison loose in northern suburbs just wants her back home
Adam's Apple, Chicago's oldest head shop, closing North Side doors
Man charged with stabbing girlfriend to death in front of her friends
Widow delivers heart-wrenching eulogy for NYPD detective
Thousands of Illinois bridges deemed 'structurally deficient'
More TOP STORIES News