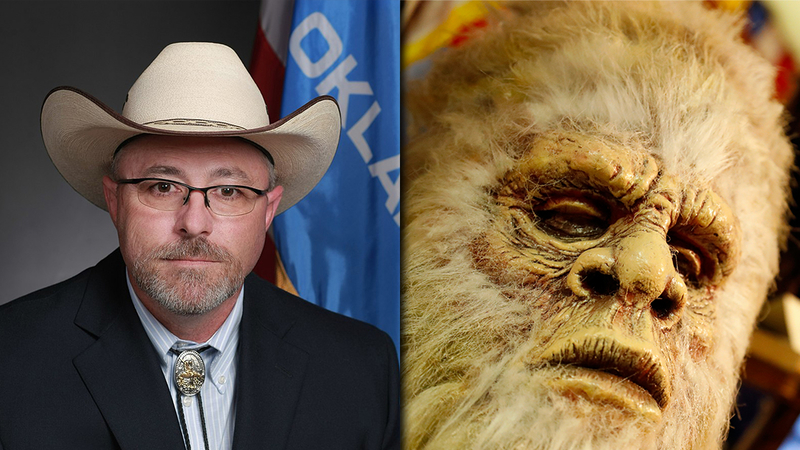 OKLAHOMA CITY, Oklahoma -- As newspaper columnist Dave Barry might say, we're not making this up.

An Oklahoma state representative has filed a bill calling for the creation of a "Bigfoot" hunting season.

Rep. Justin Humphrey filed House Bill 1648 on Wednesday, which would draft rules, dates, hunting licenses and fees to catch the elusive creatures, according to KOCO-TV.

The southeast Oklahoma lawmaker's bill calls for the Oklahoma Wildlife Conservation Commission to begin the process, but didn't provide any other direction or specifics.

Humphrey said his intent is to bring more tourism to the state.

"Establishing an actual hunting season and issuing licenses for people who want to hunt Bigfoot will just draw more people to our already beautiful part of the state," he said in a statement.

Officials with agency that would be tasked with establishing the season were not so sure about the proposal.

"We use science-driven research, and we don't recognize Bigfoot in the state of Oklahoma," Micah Holmes of the Oklahoma Department of Wildlife Conservation told KOCO-TV.

Bigfoot or sasquatch is an ape-like creature covered in hair that walks on two legs, though most claims of its existence have turned out to be hoaxes. It has been spotted by people for hundreds of years, according to the Bigfoot Field Researchers Organization, a group of scientists that looks into reported sightings.

KOCO-TV Reporter Erin Beu spoke to a Bigfoot researcher who claims to have had 26 encounters with the creature.

The creature is believed by some to inhabit North American forests, and has been big business for Humphrey's district, which includes Broken Bow, a town of approximately 4,100 nestled near the heavily forested Kiamichi Mountains.

"The most common Bigfoot sightings happen after the sun has set, and Bigfoot field investigators use nutty bars and marbles to draw him in," a public relations firm wrote in 2019.

Reaction on social media has been mixed.

"First of all, this is, as they say, 'plumb dumb'," one commenter wrote. "Secondly, if such a creature does exist, they are obviously very intelligent, as they've been able to elude humans for centuries, and should not be subject to hunting."

"This actually could possibly be a clever move, a way to provide more funding for the Wildlife department," another wrote. "As I understand, any funding to the department comes strictly from fees and licenses, so this would help further fund our state's wildlife conservation."

"This is a horrible idea, either : A.) someone actually does it and finds kills a Sasquatch, which in my eyes is murder. Or B.) Some hunter will be spooked by another hunter out there looking for the same thing and someone's gonna get killed," another commenter added.

Humphrey, a Republican from Lane, Oklahoma, was elected to the state house in 2016 and serves on the Agriculture and Rural Development and the Public Safety committees after a career with the Oklahoma Dept. of Corrections.

Humphrey told KOCO-TV that he doesn't intend for people to kill Bigfoot. Instead, he wants to offer a bounty of $25,000 to anyone who catches one.

If the Bigfoot bill passes, the season could become effective by Nov. 1.

The FBI investigated hair and skin in the 1970s thought to belong to Bigfoot that ultimately belonged to a deer, newly released documents reveal.