Anna Sewell's timeless classic is galloping to the big screen with this adaptation starring Kate Winslet and Mackenzie Foy.
OTRC
By Andrea Lans 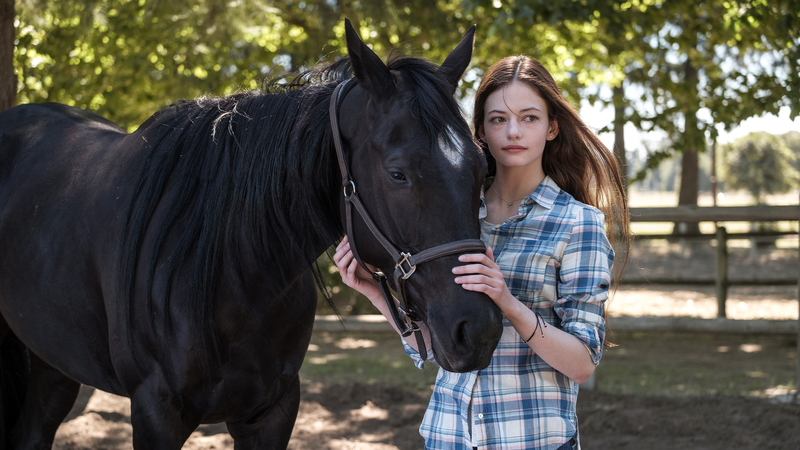 TOPANGA, Calif. -- "Black Beauty" tells the timeless coming-of-age story of a wild horse and the human she forms a deep, emotional connection with. While the film will be released the day after Thanksgiving for families to enjoy, it also had a lasting impact on the people who made it.

This latest adaptation reimagines the 1877 novel and swaps the original horse from a male stallion to female mustang (voiced by Kate Winslet) and changes the gender of the main character Jo Green (Mackenzie Foy) to female. Writer-director Ashley Avis also moved the setting of the equestrian tale to the American West and focused on current welfare issues wild horses are facing.

"I was just really impassioned, realizing as a horse person, I didn't know that was happening with the helicopter roundups and the mass holding," Avis said.

Foy, who you may recognize as Clara in Disney's live-action version of "The Nutcracker," told On The Red Carpet that this was the first time she played a character so similar to herself. Not only could Foy relate to the movie's coming-of-age themes, as she had just graduated from high school when she filmed "Black Beauty," but her character's love of horses as well.

"Doing this film, now I know the different possibilities of what the horse world could be and now I know [that] you can bond with a horse like that," Foy said of her character's bond with Beauty in the film.

The actress revealed that forming an emotional bond with the horses on set left such an impact on her, she got her own horse after she finished filming.

Foy took several horseback riding lessons prior to filming so she could master all the tricks you see in the film, including the beach scene where she rides Beauty hands free. To show off just how adept the actress is with her horse skills, she showcased the art of Liberty training, where a horse and human form a connection, with Avis' own horse, Ghost.

"This film is definitely my baby. For it to come out into the world and it's Disney+, it's Disney -- that's just surreal," Avis said.

"I hope that this movie inspires a whole new generation of horse lovers," Avis continued.