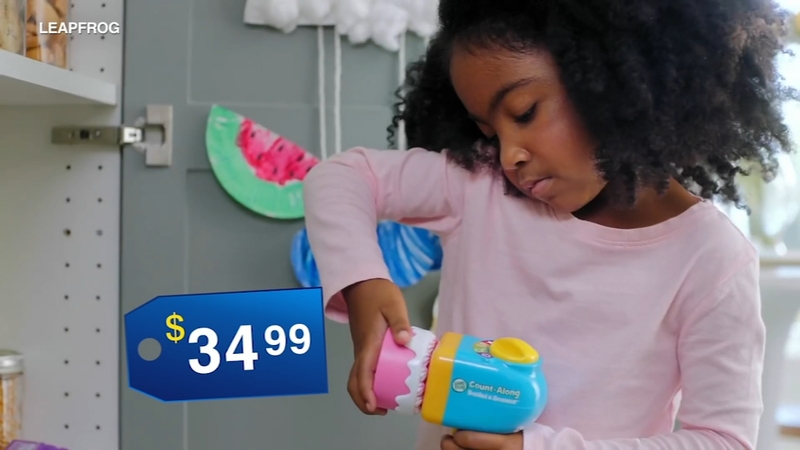 CHICAGO (WLS) -- Black Friday is here and there are a lot of hot toys you're going to want to snag while you still can.

-Features play food, shopping lists, and an interactive scanner that recognizes each food piece.
-Kids carry the shopping basket or expand it into a rolling shopping cart.
- Shop the rainbow with eight play foods in a variety of food groups, colors, shapes, and numbers.
- The fish, carrots, strawberries, cake, bread, broccoli, and grapes show off their silly personalities with music and unique phrases when scanned. Ready for a veggie dance? Let's "brocc" and roll!
- Scan foods on the shopping lists to play activities like Food Group Feast and Shapes of the Day to hear encouraging phrases and songs.
- Three interactive play modes reinforce learning. In Learn mode, scan a food to find out its name, color, and the number printed on it. Switch to Count mode to follow the scanner's directions to scan foods up to ten times. Ready to play a game? The scanner gives clues for foods by name, number, color, and shape in Game mode.
- Play pieces store in the basket.
- Ages: 2+
- MSRP: $34.99
- Available: Walmart, Target, Amazon

-Kids can pick up a load of fun with the Mickey Mouse Funhouse Wacky Wheeler Dump Truck!
-This motorized dump truck features Mickey Mouse in the driver's seat (nonremovable) and an oversized dump bed and wheels.
-Kids will love watching Mickey Mouse show off his awesome stunts!
-Press the buttons on the top of the truck and watch Mickey Mouse move forward, backwards, spin, and do wheelies.
-Kids can fill the dump bed with the bricks and empty the load before their next wacky haul. They can even create a construction site or build their own obstacle course!
-The dump truck has lights and sounds, and can even handle the biggest of jobs a little one can imagine.
-When playtime is over, kids can store the bricks and safety cones inside the dump bed until Mickey Mouse's next job.
-Includes one dump truck, three safety cones, and six bricks.
-Requires four AA batteries (included).
- Ages: 3+
-MSRP: $49.99
-Available: Walmart

-This styling head brings unicorns and hair play together!
-The glamorous unicorn Stardust is ready for kids to work their magic as her silky, tangle-free mane makes hair play easy and fun.
-Kids can braid and decorate her shimmering locks and then complete her fairytale look with reusable gem stickers.
-Ages: 4+
-MSRP: $29.99
-Available: Amazon, Tractor Supply, specialty retailers, breyerhorses.com

Toniebox (Tonies)
-This system promotes independent play, imagination, and storytelling via a screen-free digital audio system, collectible figures, and a vast and diverse offering of audio content.
-Place a Tonie figure on top of the Toniebox to hear its story, songs, and more.

-Kids mix and make their own super metallic slime!
-Includes everything they need to make slime with less mess.
-Add colorants, glitter, confetti, beads, and more - and spin!
-It's super shiny slime! Even the Slime Mixer is metallic.
-Ages: 6+
-MSRP: $24.99
-Available: Walmart, Target

-The latest version of the world's first 3D printing pen!
-Now with dual drive technology, the all-new Create+ is re-engineered to give teens an ultra-smooth and enhanced doodling experience.
-Creating and learning with 3Doodler has never been easier and more accessible to learners.
-This open and go toolkit was designed to be an extension of the classroom.
-Teens will use their imagination as they test and explore different ways of tackling a problem, introducing them to the engineering design process while advancing learning and engagement.
-Features include dual drive technology for enhanced durability and greater control and more
reliable performance with different plastic types, including ABS, PLA, FLEXY, and wood.
-Extrudes heated plastic that hardens almost instantly so teens can draw 3D structures, freehand or on stencils.
-Non-toxic plastic refills are made in the USA to ensure the highest quality possible.
-Ages: 14+
-MSRP: $79.99
-Available: Amazon, Best Buy, 3Doodler.com, camp.com

Fill in the Blanks (What Do You Meme)

-Fill in the Blanks is the new family-friendly party game where kids compete to create the funniest fill-in-the-blank story.
-Kids can let their imagination run wild - paper, pencils, and story cards are included so they've got everything they need to get creative (and competitive!) at the next family game night.
-Players rotate drawing a trivia card while the rest of the group competes to guess which answer is correct.
-Once everyone has guessed, the judge reveals the correct answer and awards one point to those who chose correctly
-Ages: 8+

-Players are ghosts whose restless spirits won't calm until they solve their own demises from the great beyond.
-Identify which suspect is the killer, the wacky weapon they used, and their motive behind the murder.
-Includes 36 cards that feature original illustrations (12 suspect cards, 12 motive cards, and 12 weapon cards), six evidence boards, six dry erase markers, six tokens, and one die.
-Ages: 10+
-MSRP: $19.99
-Available: Target

-Be careful not to get Trashed in this card game, inspired by the old-time favorite Garbage!
-The goal of this game is to get cards lined up in the right order from one to 10 while avoiding the terrible Trashed card. Other custom cards include Wild and Stop cards to spice up matches between two to four players.
-One set comes with a custom deck of 56 cards, plastic trash can cardholder, and illustrated instructions.
-Ages: 8+
-MSRP: $6.95
-Available: Winning-Moves.com

-Be a superhero that saves the universe! Kids battle it out and defend the universe Marvel-style with Wubble Rumblers.
-Made from squishy, squashy, super soft, and lightweight material, they're the ultimate accessories for play fighting!
-Kids will have hours of big bopping fun with these larger-than-life superheroes, as they see which Wubble Rumbler has the most superhuman strength and speed.
-Five different superheroes are each sold separately: Spider-Man, Captain America, Thor, Iron Man, and The Hulk.
-Ages: 6+
-MSRP: $14.99
-Available: Target

-Koosh Sharp Shot is an all-new innovative electronic game with lights and sounds.
-This interactive target game tests kids' aim with three game modes.
-Choose Target Toss, Criss Cross or Lightning Flash game modes for solo or multiplayer fun.
-Using the Koosh flingers and the included shooters, take aim and shoot at the five light up target areas as prompted. The target stands up or can be hung on a door for versatile play.
-Ages: 6+
-MSRP: $29.99
-Available: Target