In June, hundreds of Black men and boys dressed in suits gathered in Long Beach to launch Black Men Matter, a movement about family, mental health and empowerment.
KABC 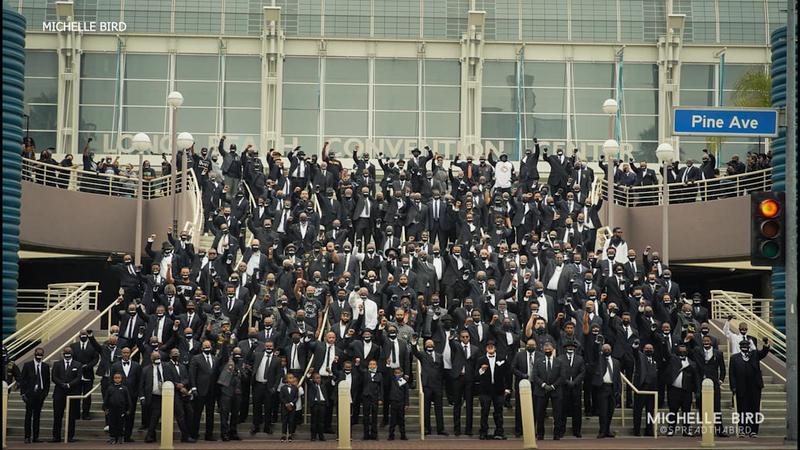 LONG BEACH, Calif. -- On June 20, a photo on social media went viral, showing hundreds of Black men and boys dressed in black suits, white shirts and masks in downtown Long Beach in California. Now, the organizers are continuing to spread their message of unity.

"It's not a protest. It's not a rally. It's an exhibition of unity," said Pastor BJ King. "Just show the strength and how it looks when we come together on one accord."

King is the Senior Pastor at LoveLand Life Center Church in Altadena. Sabrina David, a family friend from Long Beach, said the two were discussing how to give their community a voice following the killings of unarmed Black men across the country and the protests that followed.

"Our city is hurting. Our people are hurting. We just need to do something," David said. "So, he said, 'You know, how dope would it be if we just got 100 Black men to take a picture?'"

David aid she was able to get permission from the Long Beach Convention Center to host the exhibition on the front steps. She said it was her idea to ask the attendees to wear a black suit, white shirt and black mask.

"So, police officers, politicians, ex gangbangers would all look the same," she said.

Originally, King and David asked 100 men to attend, but they said that number grew to 800.

"We needed to get our men together, which ironically launched this Black Men Matter movement," King said.

David, who has a background in social work, said she hopes the Black Men Matter movement helps break the stigma about mental health in the African American community.

"I've got some resistance from some folks, and I'm OK with that, because I know that if you really think about it, and if you're bold enough to say it, it's true. Black men are hurting," she said. "We have to empower them. We have to give them the tools and we have to give them permission to heal."

Activist and journalist Shaun King posted a photo from the exhibition, which was shared nearly 30,000 times on Facebook.

"We want to learn to teach our people to stop reacting and start responding. Let's sit down and think about what is the takeaway?" King said.

As a precautionary measure amid the coronavirus pandemic, a virtual Black Men Matter event was also planned for Saturday, July 11 on Zoom. A larger event, calling for 1,000 men, is planned in Inglewood, Calif. in the near future.