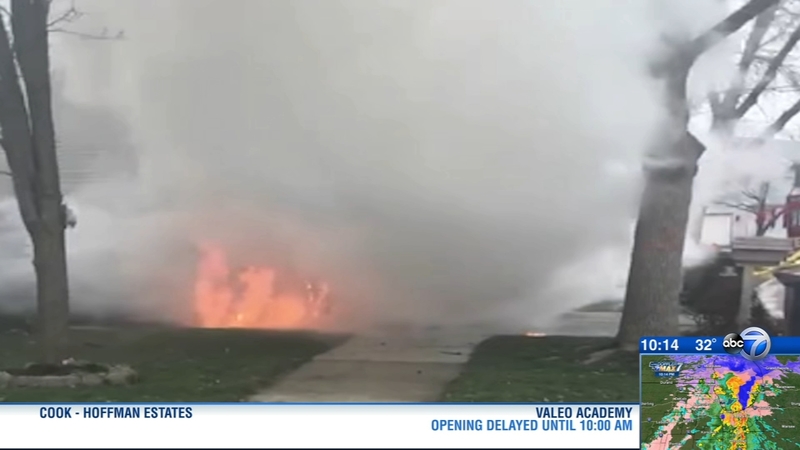 CHICAGO (WLS) -- There are new questions surrounding mystery fires involving some BMW's and Mini Coopers, both made by automaker BMW. The ABC 7 I-Team and ABC News uncovered new cases of parked car fires, without fire-related recalls.

ABC 7 Consumer Investigator Jason Knowles and ABC News first told you about the fires starting in parked cars in 2017. But what is the manufacturer doing to address what looks like an ongoing problem?

"I was trying not to freak out because I was nine months pregnant," said Maggie Latona. She watched in shock as her 2016 Mini Cooper turned into a fireball.

The car was parked in her parent's Naperville driveway in March of 2018. She said it was not running. A Naperville Fire Department report said the blaze appeared to have started in the engine. The report states that, "due to the severity of the damage...investigators were unable to determine the exact cause of the fire."

Latona said BMW gave her a discount to get a different model BMW which she cashed in on, but her family's Naperville home was also damaged and the strong blaze spread to two other nearby vehicles.

"None of this was our fault," she said.

Latona's father Edward showed the I-Team a "release letter" from BMW offering the family a payout of almost $2,000. The family said the amount would cover insurance deductibles for the home and the two other cars. But, they said, they would prefer BMW to cover the cost of everything so they didn't have to file insurance claims, which can raise rates or risk insurance eligibility.

The family said they won't sign the release letter because of a confidentiality clause which would prevent them from publicly sharing their story.

"My family kinda got the short end of the stick with this," Latona said.

The family also turned down another $3,500 in credit towards another BMW vehicle to help them replace one of the other cars, also a Mini Cooper, which was damaged in the driveway.

ABC News and the ABC 7 I-Team have uncovered more than 50 BMW fires where the owners said their cars were parked with their engines off. Latona and those other families are upset because none of those cars had been recalled for any fire related issues at the time of the incidents. However, BMW has issued over 10 fire-related recalls in the past decade.

"BMWs have these fire problems for a very long time," said Jason Levine, executive director at the watchdog group The Center for Auto Safety. "They've taken a very long time to respond to them. And it doesn't seem that they're getting to the bottom of the problem."

Levine said BMW and the government should be doing more.

"I think what is particularly scary is that there's no watchdog out there that BMW is afraid of," he said. "The way this should work is, they should be concerned about their bottom line being safety for consumers and NHTSA coming after them if they need to."

NHTSA, the National Highway Traffic Safety Administration, has over 90 complaints of parked BMW fires filed on its database. The organization said they have no current investigation into the fires. Instead, NHTSA said it's "in close contact with BMW in its oversight of the automaker's recalls that involve a potential fire risk, and will take appropriate action if warranted."

BMW representatives declined interviews but in statements they have said that with over 4.9 million cars on the road "fire incidents involving BMW's are very rare," and that "BMW takes every incident very seriously..." And they stated that "vehicle fires can result from a wide variety of external reasons unrelated to product defects."

"I would have never gotten that car if I would have known this could happen," Latona told the I-Team.

In the months following ABC 7's investigation 2017 investigation, BMW issued three fire related recalls affecting over 1 million vehicles. Latona's Mini Cooper model was not one of them. This past December, BMW notified users of another recall but despite these recalls, fire have continued.

If you are part of the recall, dealers will replace parts free of charge.

If you own a BMW you should also look out for a notice in the mail.

May 2018 recall
According to the automaker, there is an auxiliary water pump that could fail on the affected vehicles, causing a circuit board to overheat. As a result, the overheating circuit board could lead to a fire. Dealers will replace the electric auxiliary water pump at no charge, but replacement parts are not currently available. BMW says it will begin notifying owners of affected vehicles starting June 11, 2018 and a second notification will be sent out when replacement parts are available. In the meantime, the automaker is recommending that affected owners park their vehicles outdoors until the recall work can be performed.
SEE ALSO: BMW M2 Competition Gets Some Radical M Performance Parts