Body found in Jasper, Texas motel believed to be that of missing boy, 6 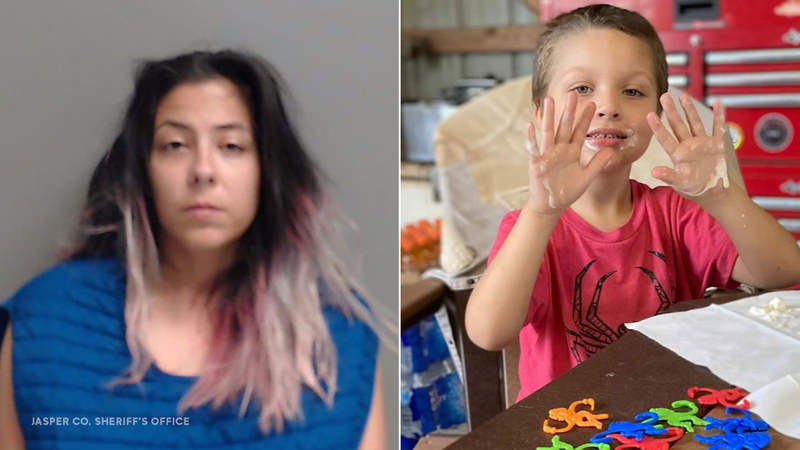 HOUSTON -- Theresa Balboa, the girlfriend of Samuel Olson's father, has been charged after a body believed to be the missing 6-year-old boy was found in a motel room in Jasper, Texas.

A tip led police to the discovery of the body Tuesday night at Best Western motel about two hours northeast from Houston, just days after the young boy was reported missing.

Video from overnight showed investigators going in and out of the Jasper motel room wearing protective clothing.

Houston Police Chief Troy Finner said the discovery of the body confirmed the worst fears for the young boy.

It is with great sadness that I share with you that a body - of who we believe to be 6-year-old Samuel Olson - was recovered in a motel room in Jasper, Texas, earlier this evening.  1/2

Finner additionally confirmed that a suspect is being questioned in the case. A source told ABC13 that suspect is Balboa.

"I ask the entire Houston community to join HPD in sending prayers for Samuel and his family," Finner tweeted.

WATCH: With conflicting information in the case of Samuel Olson's disappearance and death, here's everything we know so far about the timeline of when he was last seen.

The little boy just turned 6 over the weekend.

Balboa reported him missing on May 27.

On Wednesday, she was charged with tampering with evidence. HPD said at a briefing Wednesday morning that there were inconsistencies in Balboa's statements.

Officials with HPD also confirmed that prior to Samuel's disappearance, Balboa was out on bond for assault with intent - impeding breath for a November 2020 case, where the complainant was Samuel's father, Dalton Olson.

Balboa is now in the Jasper County Jail.

On Monday, Balboa said she last saw the child last Thursday morning in southwest Houston at his paternal grandmother's house. Balboa was also seen at a search for Samuel.

"I've worked many, many of these cases. I don't have a good feeling," said Texas EquuSearch founder Tim Miller.

"I was going to take Sam to school when his mother showed up with the police officer, or who I was under the impression to be a police officer, and they demanded me to release Sam," Balboa said Monday.

Balboa said she handed the young boy to the mom because the parents are in a custody battle. However, investigators reportedly have not been able to verify that.

In fact, the child may have gone missing weeks ago.

The investigation into his disappearance took a troubling turn when it was discovered that he hadn't been seen at his elementary school since April 30, several weeks before he was reported missing.