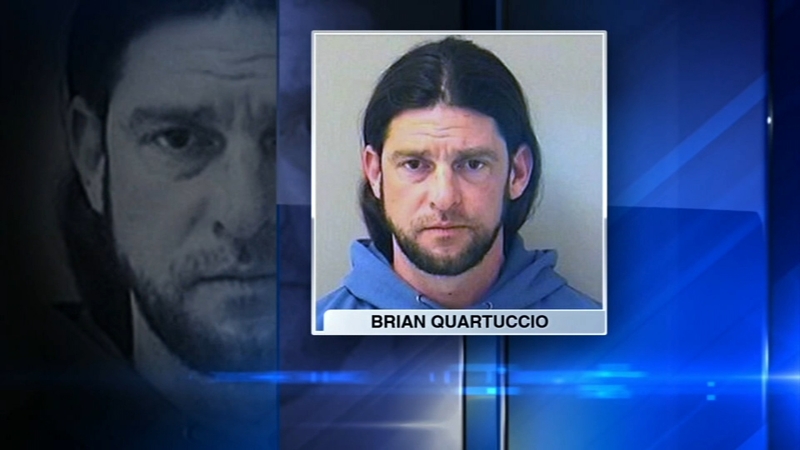 UNINCORPORATED ST. CHARLES TOWNSHIP, Ill. (WLS) -- A man has been charged in connection with a hit-and-run crash that left a 7-year-old girl critically injured Sunday in unincorporated St. Charles Township.

Brian Quartuccio, 42, turned himself in to police at about 12:15 p.m. Monday. According to the Kane County State's Attorney's Office he was charged with leaving the scene of a crash and failure to report a death or injury, and two counts of driving while his license is revoked, all felonies. He has also been charged with misdemeanor operating an uninsured motor vehicle, and failure to reduce speed to avoid an accident, a petty offense, the state's attorney said.

The Illinois Secretary of State's Office confirmed Quartuccio was driving on a revoked license from 2012, after he was convicted of DUI for a third time. He has also been caught driving with a revoked license at least three times and is currently on probation.

"At the end of the day, law enforcement can't account for everybody who makes the decision to get behind the wheel of a car," Kane County Sheriff Ron Hain.

The crash happened around 1 p.m. Sunday in unincorporated St. Charles Township. The girl, identified by her family as Lexi Hanson, who lives in the area, was riding her bike near the intersection of Geneva and Courier avenues when she was hit by a black Dodge pickup, according to the Kane County Sheriff's Office.

The sheriff's office said the Quartuccio left the scene of the crash and ditched the truck before running away. He surrendered to police nearly 24 hours after the crash.

"How can he leave her just laying there? And not show up until a day later and turn himself in?" wondered Xochitl Cortez, victim's neighbor.

Hanson was airlifted to Lutheran General Hospital in Park Ridge and was listed in critical condition with possible life-threatening injuries. A hospital spokesperson said she has improved to fair condition on Monday afternoon. She suffered several broken bones, contusions, and a spinal injury.

Hanson's family has set up a GoFundMe campaign to help pay for her medical costs.

"I think the guy is scum for leaving the scene," said Mike Humbert, a neighbor. "I can't understand why someone would even do that."

Earlier, deputies searched for the suspect by air and ground. They deployed K-9 units a few miles away after one resident spotted the man in his neighbor's backyard.