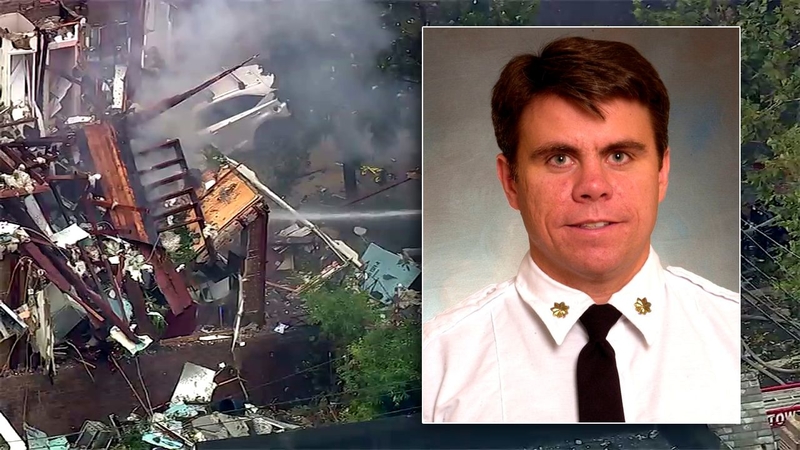 NEW YORK -- An FDNY battalion chief was killed and 20 other people injured in an explosion and fire at a house in the Bronx after what appeared to be a drug lab was discovered.

It happened inside a two-story private house on West 234th Street in the Kingsbridge section just after 7:30 a.m. Tuesday.

Battalion Chief Michael Fahy, a 17-year-veteran with Battalion 19 in the Bronx, was evacuating the house at the time and was struck by debris from the explosion.

He was rushed to New York Presbyterian Hospital-Allen Pavilion, but could not be saved.

"He was a star, a brave man," said FDNY Commissioner Daniel Nigro of Fahy, a married father of three.

"It's a terrible loss for the Fahy family, a loss for the fire department family," said Nigro. "We feel it deeply today."

At 6:22 a.m., firefighters responded to a gas leak in the house. At some point, an illegal drug lab was detected and police were called.

Police say the house exploded afterward but it wasn't immediately clear what caused the blast that killed Fahy.

"Our members were investigating an odor of gas, he was directing operations," said Nigro. "They evacuated the surrounding buildings, got everyone else out of the way, when the explosion occurred."


Video from NewsCopter 7 over the scene:
EMBED More News Videos

NewsCopter 7 over the scene in the Bronx where multiple people were injured in a house fire.

The single-family house was partially destroyed and the explosion rocked an area of row houses in Kingsbridge.