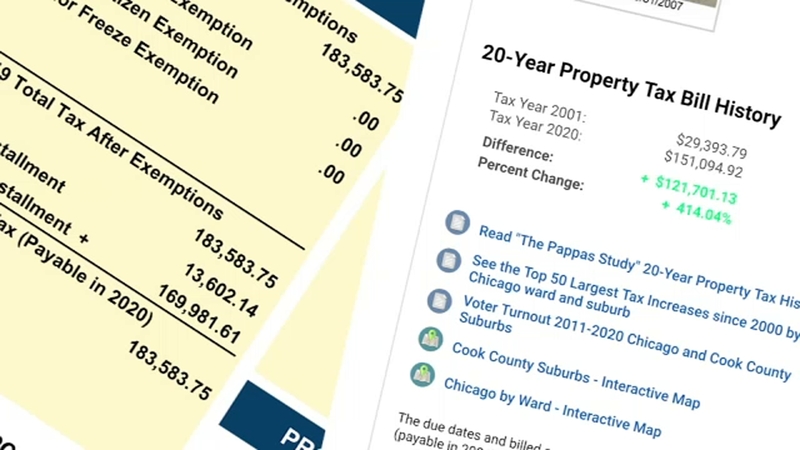 PALATINE, Ill. (WLS) -- A third-generation family business is now vacant after a change in how they are assessed for property taxes, they said has ruined them.

"We were supposed to be here, I thought for forever," said Ken Kinsch, a former owner of the Kinsch Florist and Garden Center.

Rubble is what's left of the suburban greenhouse and flower farm after more than 80 years in business.

"We had four greenhouses; they were 36 by 100. We grew carnations and mums," Kinsch said.

The business was opened in Palatine in 1938 by brothers Ed and Leo Kinsch. The current generation of owners, including Kinsch, can now only look around in disbelief.

"It's very sad. This is always what was supposed to be in my family what's your family and we loved doing it. You know, I love people, my father liked doing it with my family. And it was a family tradition," he said. "We were the flower makers."

After those big bills, the family decided they had to call it quits and shut down, hoping that if this land could be considered vacant it would eventually lower the tax bills. Now five acres of land sits empty with overgrown weeds.
If classified as vacant, future tax bills could decrease. But what is going on with those current bills? The increase was due to the Cook County Assessor changing all of the land from "farm" to "commercial." Previously only their small retail shop was designated "commercial."

"For 50-plus years the flower shop was always commercial and the greenhouses were always agricultural. You know, what has changed?" Kinsch wondered. "And no, no, this is all commercial. What has changed? Why has it changed? And nobody would tell us."

That 2019 Kinsch reassessment was Cook County Assessor Fritz Kaegi's first year of assessments. And the Kinsch family wasn't alone; according to the Cook County Board of Review, all commercial values rose 98% after the 2019 assessment in the northern townships. Many businesses appealed with the board and won. On average, those assessments then decreased from 98% hike to a 35% hike.

"They put their blood, sweat and tears in here. And literally, in 365 days, the county reassessed everything and put us out of business, it was just not feasible to be here anymore," said family member Michael Kinsch.

The assessor's office didn't answer why the land designation was changed, only saying that, "Land assessed as farmland pays two and half times less in property taxes than commercial property."

The Kinsch family is appealing to the Cook County Board of Review and the state, but even if they eventually win they say they've already lost, because they'd still have to pay the money owed during a slow appeals process. "It was far too late for business, there's just no way to support it. We have scraped and struggled to just maintain paying the property taxes due right now," Michael Kinsch said.

The assessor's office added, "In 2019, the appeal filed for this commercial property did not provide enough documentation to support its assessment as farmland. Therefore, it was assessed at a higher rate."

Family members say they believe they provided the right documentation and will continue to appeal.

The Kinsch's small flower shop which used to be here however did survive, moving to a shopping strip down the road.

"We were the flower people," Kinsch said. "I love that. And it's sad that now that it's not here. It's not here anymore. But time moves on and things change."

The I-Team also found two other Northwest Side garden centers with nearly the same acreage as Kinsch flower farm that were not categorized "commercial" and have much lower taxes.