Emanuel, Rauner optimistic about effort to lure Amazon to Chicago

The assessment comes one day after a Chicago delegation, made up of state and local reps, visited Seattle to learn about what the company is looking for.

On Wednesday, the city began accepting proposals from developers for what sites the city might consider as it prepares to send a bid to amazon.

Site suggestions are due next Wednesday, Emanuel said, giving the city three weeks to get its bid in.

Emanuel said Chicago has everything that Amazon is looking for.

Rauner agreed that Chicago is a competitor.

On Wednesday, he signed a bill giving advanced practice nurses expanded opportunities for what health care treatments they can offer.

Rauner admitted the state's economic health, including pension debt could be a concern for Amazon.

Chicago is not the only one planning to make a bid.

Also on Wednesday, the village of Oak Brook said it would be pitching the McDonald's Corporate campus, which the company will leave next year, as a location for Amazon to consider.

A state representative from Kankakee also is pushing for that city to be considered for Amazon's new headquarters.

Earlier this month, Amazon announced plans to build a second headquarters. The tech giant said it would consider sites in metropolitan areas of at least one million people with access to public transit, major highways and international airports. The company says it plans to spend more than $5 billion on a new campus.

The new headquarters would bring 50,000 new jobs over the next 10 to15 years, offering positions that would pay an average of more than $100,000 annually.
Report a correction or typo
Related topics:
businesschicagowest loopcalumet heightsnew businessbruce rauneramazonrahm emanuelchicago river
Copyright © 2020 WLS-TV. All Rights Reserved.
RELATED 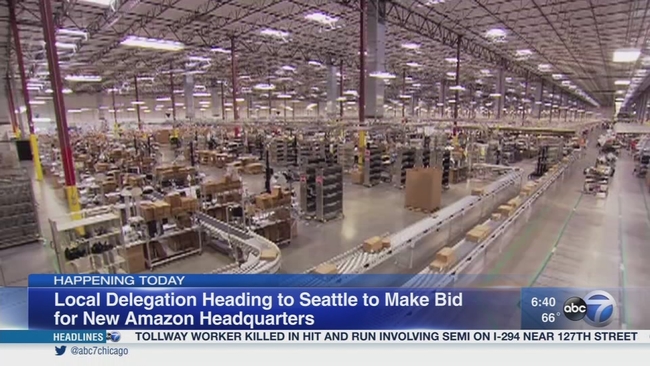