An ABC7 I-Team Investigation
WLS
By Jason Knowles
CHICAGO (WLS) -- Since their story on flaking furniture aired Thursday night, the I-Team has been flooded with more emails and calls from dozens of people dealing with the same problem. Customers spent thousands of dollars on popular material. They say they were told it was supposed to be durable.

The I-Team exposed the problems with several brands of bonded, bi-cast and blended leather.

"It's a manmade by-product of leather much like pressed wood, which is a by-product of wood," explains Kevin Gillan of Advance Leather Solutions.

After spending thousands, customers say couches started to peel within one to two years after the purchase. Most say warranties didn't cover peeling and that stores and manufacturers were being unresponsive.

"And it just got consistently worse to the state that it is now," said James Zima.

One brand the I-Team received four complaints about was Durablend, made by Ashley Furniture. According to the label it's a combination of polyurethane, polyvinyl chloride, polycotton and leather.

Ashley Furniture says they stand behind their products and that they would address concerns. They gave Zima $1,200 in gift cards after the I-Team became involved.

In fact, several manufacturers and stores have given people in the I-Team's story store credit, or have agreed to partial reimbursements. That total of refunds with the I-Team's help is now nearing the $10,000 mark.

If you are one of the people who has emailed or called, the I-Team has passed your information along to the manufacturers and stores so the refunds they are getting for viewers may continue to grow. If you have a tip for the I-Team, call the hotline at 312-750-7TIP.
Related topics:
businesschicagofurniturei teamconsumer
Copyright © 2020 WLS-TV. All Rights Reserved.
RELATED 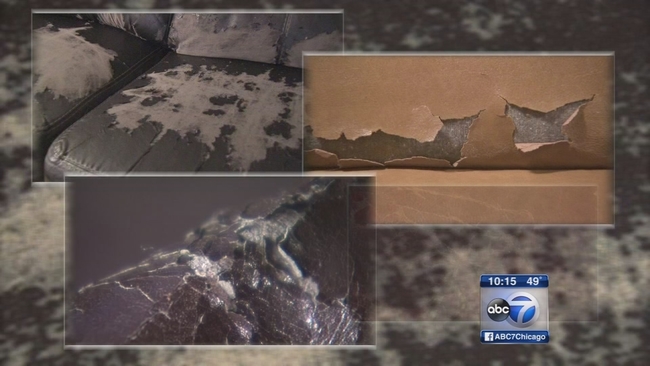