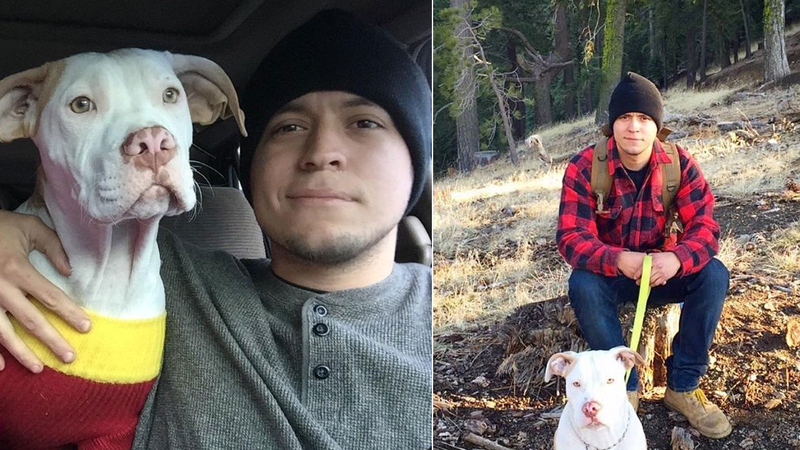 RIVERSIDE, Calif. -- The last year has been a tough one for Sebastian Delgado. The 22-year-old began having seizures and was then diagnosed with a rare form of cancer.

"They found a tumor in my head so I knew I had to get brain surgery," Delgado said.

While doctors were medically saving his life, Delgado says, his dog, Maiden, was emotionally getting him through the ordeal.

"I took her walking, we went hiking, all that stuff, you know," he said. "I just did everything with my dog."

"The first thing that he asked me when he got out of surgery is, 'Where's Maiden?'" said Delgado's girlfriend, Monica Tomer. "He could hardly talk or say his own name, but he remembered his puppy."

But now, Maiden is gone. On Saturday, the 10-month-old pit bull found an open gate at the Riverside, Calif., home of family friends and wandered off near Jefferson Street and Magnolia Avenue.

Delgado and Tomer have since been desperately searching for Maiden. With nowhere else to turn, Tomer's sister contacted Eyewitness News by using #ABC7Eyewitness.

"She's got big ears, a pink nose with like little brown freckles on it, green and brown eyes and she just looks funny, but she's cute though," Delgado said.

Delgado and Tomer have contacted every animal shelter from Los Angeles to Las Vegas. They've hung up fliers and posted signs as well. They're now hoping someone will see Maiden and give them a call.

"It just breaks my heart because he deserves to have her," Tomer said.

Delgado says he needs her as well. Doctors say his tumor will most likely come back, as will chemotherapy and possibly more brain surgery.

A man battling brain cancer is asking for the public's help in finding his biggest supporter, his dog. Maiden went missing in Riverside Saturday, March 14, 2014.

Meanwhile, Delgado says, his focus right now is making sure Maiden is safe.

"I hope they're not doing anything wrong to her because I know she's a pit bull and a lot of people do bad stuff to them. I just hope they give her back to me," he said.

Anyone with information on Maiden's whereabouts was urged to contact Delgado at www.facebook.com/SebastianandMaiden or call (909) 450-6136.