Cape Cod Room in Drake Hotel to close after 83 years 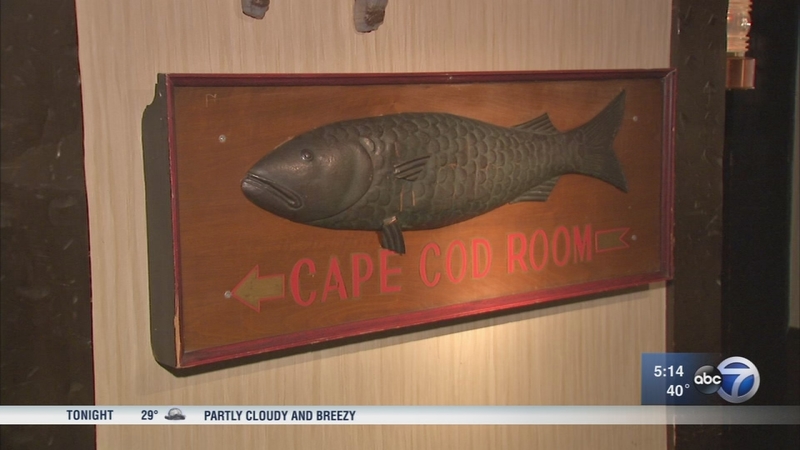 CHICAGO (WLS) -- The famed Cape Cod Room restaurant in the Drake Hotel will close on New Year's Eve, after 83 years in business.

The restaurant opened in 1933 during the World's Fair. It survived changing times and trends for more than eight decades. But on New Year's Eve, the Cape Cod Room will serve its last meal.

The Cape Cod room is living history, filled with stories and moments of famous names from yesterday and the stars of today.

There is something special about the restaurant, but the Drake Hotel is changing, undergoing a full renovation. And that means the Cape Cod Room is counting down its final hours.

"People have this personal connection with the Cape Cod. It's not just four walls. It's not just the food," said general manager Theodore Daskalopoulos.

It's a place people, all kinds of people, have gathered since 1933.

"We don't kiss and tell here, but we have had a lot of famous people over the years," Daskalopoulos said.

Marilyn Monroe and Joe DiMaggio famously carved their initials in the bar. And the story goes she put a love note in a bottle, one of the many displayed on the wall.

"She placed a note in one of our bottles that we have displayed here. She said, the next time I come in I will reveal the note," said Daskalopoulos.

Over the years the bottle disappeared, but not the stars. Table no. 4 was a favorite for Sophia Loren and Elizabeth Taylor. Oprah had her preferred spot, and so did Michael Jordan. And one man was there to see it all.

"In Chicago, there was only one Patrick. He was the legendary maitre'd of the Cape Cod for over 40 years," Daskalopoulos said.

When the Cape Cod announced it was closing a few weeks ago, that was the end for Patrick Bredin too.

"Maybe it was his way of checking out. Cape Cod is closing. I have no reason to be alive anymore. I'm leaving too," said Daskalopoulos.

You see, the Cape Cod is a special place.

"It's the coziness, the warmth of the hospitality from the time you walk in, the maitre'd, the staff - very cordial, very professional, very proud - and, of course, the food," he said.

A simple gesture from a recent customer said it all. It began when Daskalopoulos complimented the customer's tie.

"Done with dinner, on the way out, he says 'Thank you, I hope you see you soon. Let me know where you're going to be next. Oh, by the way - here's the tie,'" Daskalopoulos recalled.