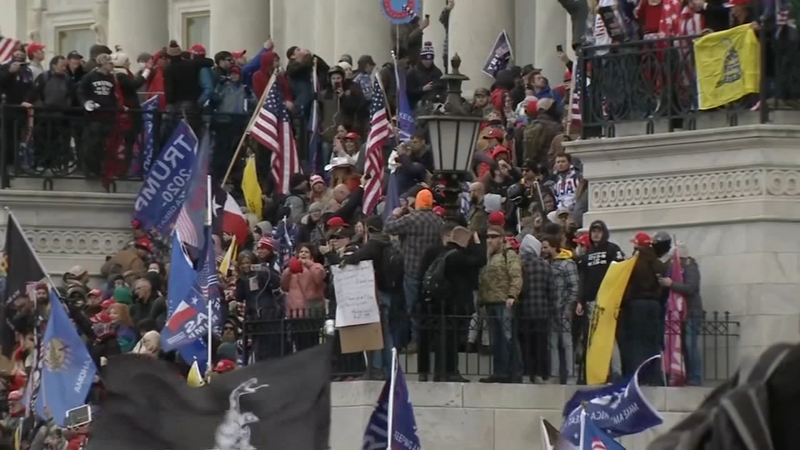 CHICAGO (WLS) -- Four weeks after the Capitol attack, authorities are still searching for dozens of people who raided the building and fought with police while federal agents are continue to make arrests.

Wednesday, 30-year old Ethan Nordean was taken into custody in Washington State. Prosecutors say Nordean describes himself as the "Sergeant of Arms" of the Seattle Chapter of the Proud Boys and was one of the first to breach the building, as shown in a picture included in the federal complaint.

Two days before the Capitol attack, investigators say Nordean posted a video on social media and wrote: "Let them remember the day they decided to make war with us." Authorities in Canada Wednesday designated the Proud Boys as a "terrorist entity" after their role in the Capitol attack.

Illinois resident Matthew Capsel is also among the newly charged in the attack. He was arrested in Marion and is set to appear before a DC judge midday Thursday.

In a criminal complaint, prosecutors have submitted photos allegedly from Capsel's Tiktok account they say show him battling National Guardsmen. One Twitter user also posted a screengrab of what appears to be Capsel's TikTok that shows him in front of Chicago's Trump Tower.

"We all know that football is a team sport. But security is a team sport as well," said Michael McPherson, Special Agent in Charge of the FBI's Tampa Field Office. "We have activated our intelligence operation center staff not only by the FBI, but with law enforcement partners from 17, federal, state, and local agencies to rapidly collect, analyze, and share threat information."