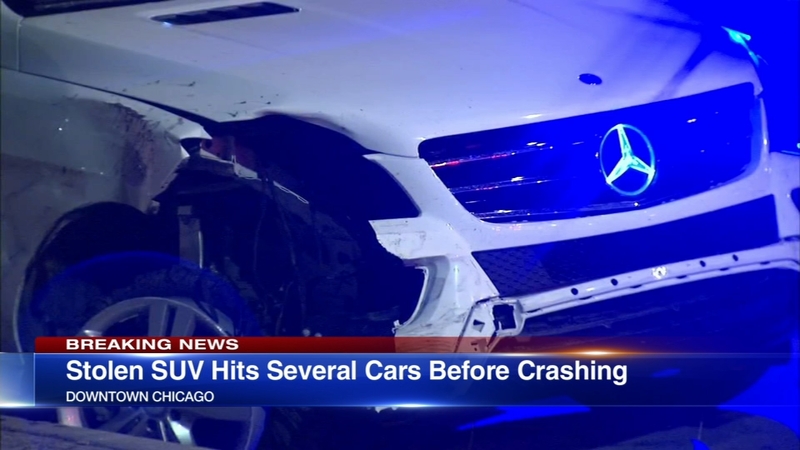 CHICAGO (WLS) -- A carjacking in the Gold Coast Tuesday night resulted in a police chase and crash near Buckingham Fountain.

The incident began in the 1000-block of north Rush Street at about 7:15 p.m. when a 30-year-old man was loading packages into his car, a 2015 Mercedes, with the key-less remote near the vehicle. Someone jumped into the car and began to drive off.

The 30-year-old man tried to stop the car as the thief took off and was briefly dragged. He suffered some bruising and was taken to Northwestern Memorial Hospital in stable condition, police said.

Jennifer Leving was dining outside in the area where the carjacking happened and said she felt the need to shield herself amidst all the chaos.

"My father saw a weapon pulled and so he said 'Get on the floor!' and we hit the pavement and when I stood up I saw the car back up and he just kept ramming into different cars and then we ran into the kitchen," she said.

The thief struck multiple parked cars, a pedestrian and a cyclist as they fled in the stolen vehicle, police said.

The pedestrian was also taken to Northwestern Memorial Hospital in stable condition. Police said the cyclist was treated on the scene for non-life threatening injuries.