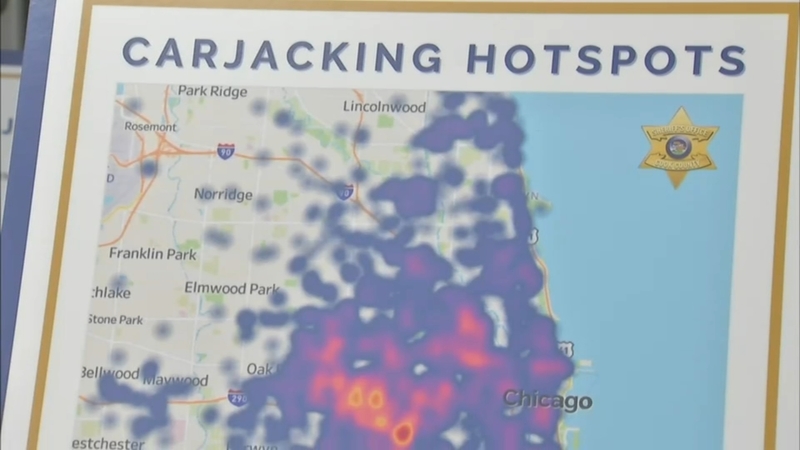 CHICAGO (WLS) -- With carjackings up 43% in Cook County compared to last year, Sheriff Tom Dart unveiled a list of new efforts Thursday to curb the crimes, including one directly aimed at car manufacturers.

For the victims like Dr. Stephanie Davis, it's personal. A carjacker targeted the retired Air Force flight surgeon's Porsche Cayenne at a Harvey gas station, pointing a gun at her on Sept. 17 at 7:30 a.m.

"Instinctively, I grabbed the barrel of the gun to point it away from my head, perhaps my military training caused me to do this split-second act of self-preservation," she said.

Davis, who was also a prior-enlisted Marine, was yanked from her Porsche. The criminals took her vehicle, cell phone and purse and apparently drove from Harvey to Elmhurst, where police linked her vehicle to another carjacking the same day.

A week later, Riverdale Police had an ATM case linked to it, too.

"My case is a good example," Davis said. "If the tracking and recovery occurred sooner, there would be less victims associated with my vehicle."

"It's all across the board," Dart said. "Some manufacturers, some dealers only operate 9-5 weekdays, so we can't even get ahold of anybody. Others say we need consent from the actual owner."

Even though Davis made several calls, it took 12 days to track her vehicle.

So now, Dart has sent a letter asking 11 major automakers for their "cooperation," asking each of them to set up a "24/7 hotline" that customers and law enforcement could use to track vehicles quickly. Dart wants a meeting now.

"I'll drive out to Detroit today, today if you want to have a meeting," Dart said. "I need to have agendas there where we can sit there and say, literally, here are the points I'm interested in, what are the actions we can do now."

In the meantime, the sheriff's website has a place where owners can fill out a consent form now so if you are carjacked, investigators have your permission to contact auto companies and track your vehicle.

Davis hopes the companies look at the big picture, a 24/7 hotline.

"Hopefully the automakers will participate because it will be beneficial and help, a lot of people - not just in Chicago, but nationwide," she said.