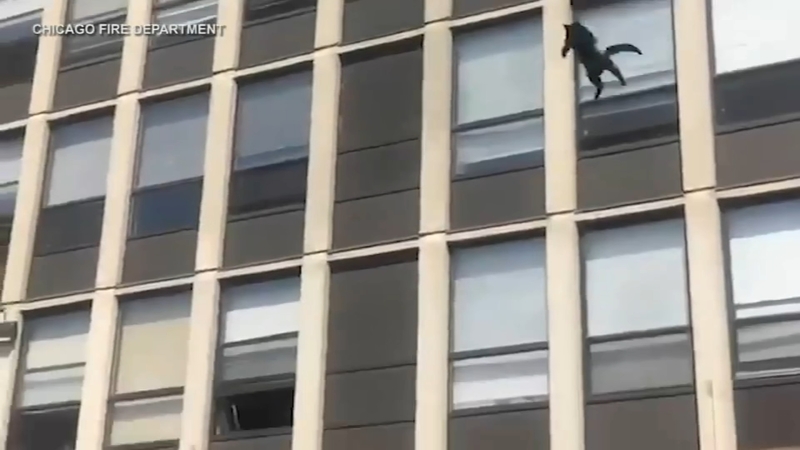 CHICAGO (WLS) -- A now-famous feline that took a flying leap of faith out of a 5th floor window during an apartment fire in Englewood is still missing.

Hennessy the cat hasn't returned home a day after video showed him landing on all fours outside the burning building at 65th and Lowe, the Chicago Fire Department tweeted Friday afternoon.

Cat update. Hennessy the flying cat has not returned home yet. Neighbors near 65th and Lowe are out looking for the now famous feline. His owner says he is a house cat that did not go out. We will update if he is located.(Langford)

Hennessy's owner said he is a house cat that does not go outside, so neighbors are now helping search for him. She thinks the cat is hiding out near the building and scared.

Maybe he's down to eight lives? A cat took a leap of faith out an apartment window during a fire in Englewood, and survived the fall unharmed.

Video posted by the Chicago Fire Department on Twitter Thursday afternoon shows smoke coming from broken, open windows in one or two units on the fifth floor. Then, after a couple of minutes, a small dark shadow appears.

It's a black cat, cautiously sticking its head out of one of the broken windows. It takes stock of the distance below, tests the side of the building with its front paws briefly, and then jumps.

There's an audible gasp from onlookers as the cat falls, but it easily misses the wall around the apartment building and lands on all four feet with a bounce on the grass beyond it.

"It flew. Then landed and went that way," witness Kaniyah Sims said. "Everyone was screaming and then we all were in shock because it landed and did not die."

The cat then immediately runs off. He hasn't been seen since.

"You know what they say about cats having nine lives. It is true," witness Karimah Yasin said.