Illinois loses 1 seat in Congress after 2020 census, will have 17 instead of 18 in House of Representatives 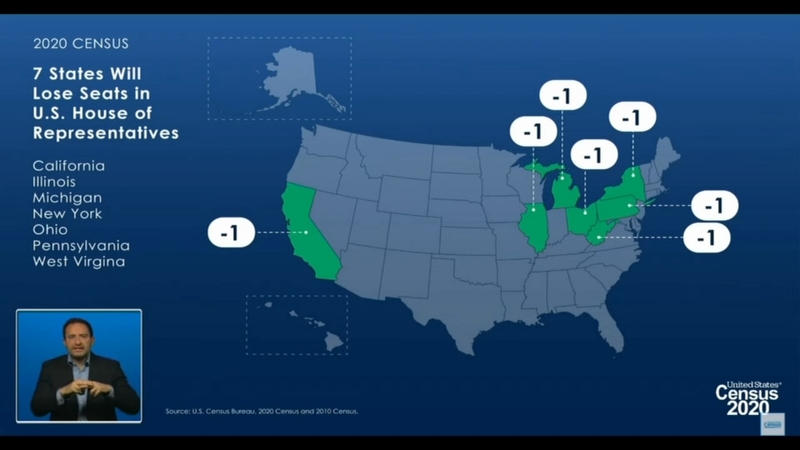 Illinois to lose 1 seat in Congress after 2020 census

CHICAGO (WLS) -- The U.S. Census Bureau announced Monday that Illinois will lose one seat in the House of Representatives following the 2020 Census.

That would bring the total number of Illinois seats to 17, down from 18.

The Census Bureau made the announcement in a livestreamed press conference Monday afternoon.

A total of seven seats shifted as a result of the 2020 census. Oregon, Montana, Florida, North Carolina and Colorado all gained one seat in the House. Texas gained two seats.

Illinois, California, Michigan, New York, Ohio, Pennsylvania and West Virginia all lost one seat as a result of the 2020 census.

A total of 37 states kept the same number of seats in the House of Representatives. Six states will only have one representative in the House: Alaska, Delaware, North Dakota, South Dakota, Vermont and Wyoming.

There has been a decades-long trend shifting more congressional seats to the South and West.

"Since 1940, the regional trend with apportionment has been an increase in the number of congressional seats for the south and west and a loss for the North, Northeast and Midwest," said Dr. Ron Jarmin, acting director for the U.S. Census Bureau.

"The majority party that has sent the population packing and people fleeing the state of Illinois should not be uniquely taking the initiative to select their own voters," said State Rep. Ryan Spain (R-Peoria).

Democrats are already in the process of redrawing the district map; by state law, they must draw new congressional and legislative districts by June 30.

"They don't appear to be in any mood to offer the Republicans a gift allowing them to get in on the party," noted Chris Mooney, professor of political science at UIC.

But Rep. Robin Kelly (D-IL 2nd District), who is also chair of the Illinois Democratic Party, said she's confident the process will be fair.


"They'll dictate my seat also, but I expect them to be fair and to do the best job they can do and take into consideration we are losing a seat," she said.

The Census Bureau will release the rest of the data in August, which will include more specifics on race and geography, information the Illinois Democrats will not have before their June 30 deadline. Experts say that could mean the highly political process of remapping districts may end up in the courts.
The release of the apportionment numbers comes almost four months later than planned because of delays caused by the pandemic and anomalies discovered in the data as the numbers were being crunched.

The numbers are state population counts that show how many residents each state has gained or lost over the past decade.

The 435 seats in the House of Representatives are divided among the states based on population. As growing states get more congressional seats because of population gains, that means fewer seats for states that lost population or didn't grow as fast.