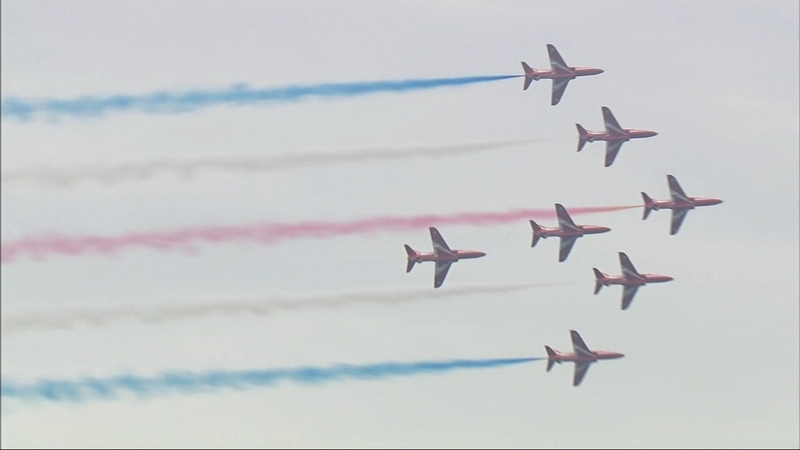 Despite delays due to rain and cloudy skies, plenty of people waited the weather out for the largest free air and water show in the country.

CHICAGO AIR AND WATER SHOW GUIDE: What you need to know

All eyes looked to the sky for the opening act, which was a tandem jump with the U.S. Army Golden Knights Parachute Team and Chicago Blackhawks legend Chris Chelios.

"It was great," Chelios said. "What an experience. I've never done it before."

Planes will be soaring along the lakefront Friday to go through practice runs and offering a preview of this weekend's Chicago Air and Water Show.

Visiting Atlanta native Felicia Williams was among the crowd of people watching from the Chicago lakefront Saturday.

There were also several civilian acts, including crowd-pleaser Sean D. Tucker, who wowed the crowds with Jessy Panzer as Team Oracle.

British newcomers, the Royal Air Force's Red Arrows, didn't disappoint as they took part in a gender reveal for the family and friends of fellow Canadian flyer Justin Hill and his wife Kate. The couple's first child is due in October.

"They are the only jet team that can do this that we know of with their smoke," Kate Hill said.

The Royal Air Force's Red Arrows will be performing at their first Chicago Air and Water Show this year.

The Chicago Air and Water Show dates back to 1959, and millions of people attend each year.

"This has become a summertime tradition not only in Chicago, but in the Midwest. People come from all over to be in Chicago this weekend because it's the best weekend of the year," said Mary May of the Chicago Department of Cultural Affairs and Special Events.

Herb Hunter has been the voice for hte Chicago Air and Water Show for 32 years.

Herb Hunter has been the voice of the Chicago Air and Water Show for 32 years.

"It's the fans and the crowd and the kids out here and airplanes bring out the kids in everybody, so it's so exciting and it's here free for the people of Chicago and all of our guests and it just makes the summer," Hunter said.

Former Blackhawks star and Hockey Hall of Famer Chris Chelios will be jumping with the U.S. Army Golden Knights Parachute Team at this year's Chicago Air and Water Show.

Although hindered by a low cloud ceiling, the U.S. Navy Blue Angels closed out Saturday's show.

"It was beautiful seeing them flip and turn. All of that is great. We love it. It's exciting," said Cynthia Steen, a spectator.

Air and Water Show officials said they're hoping for a full complement of performances Sunday. But if the bad weather rolls in again, spectators could see more of the same.