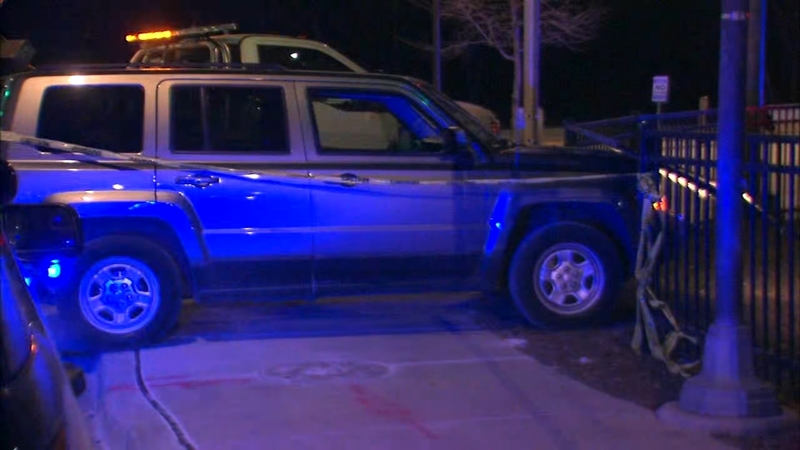 Car with kids inside stolen, crashed on Northwest Side, police say

CHICAGO (WLS) -- Children were inside a car when it was stolen and crashed on Chicago's Northwest Side Thursday morning, police said. It all unfolded on the police scanners.

The entire episode was over in a matter of minutes, but it sent police scrambling to locate the vehicle and the two young girls who were inside it.

A woman was making a newspaper delivery in the 5600 block of North Sacramento Avenue when she left her Jeep Liberty running with her 12- and 10-year-old daughters in the vehicle's backseat.

"The victim, the woman was delivering newspapers as part of her job in the morning. happened to have the kids in the vehicle while she was doing so," said Alderman Andre Vasquez, 40th Ward.

A black sedan, possibly a Dodge Charger, pulled up behind the Jeep and an unknown man exited the passenger side. The man got into the running Jeep and took off with the sedan following. The two children were still inside the Jeep at the time, police said.

"She was delivering newspapers, got out of the car, and one of the males jumped inside," law enforcement could be heard saying on the police scanners.

With two children missing, the search for the vehicle intensified.

Minutes later, just over a mile away, the suspect crashed the SUV near McCormick and Devon Avenue before running away.

"Auto accident McCormick and Devon on a gray Jeep that crashed into a fence. The caller believes someone may be in the rear of the vehicle," scanner traffic said.

Police quickly rushed to the crash to see if the girls were inside.

"Are the children inside this vehicle? Is anybody still on the scene can tell me if the kids are inside this car," a police dispatcher said.

When police arrived, only one of the girls was in the vehicle, officials said. As it turns out, one of the girls had been dropped off by the offender in or near this Home Depot Parking Lot, just moments before crashing.

"Got in the car again and I guess a second must have started crying and that led to a car crash, and thankfully the kids were OK and physically safe," Vasquez said. "I have a 7- and 8-year-old, and when I heard, I immediately felt it in my chest."

Both girls were found safe and were later reunited with their family. They were not hurt.

The incident comes as anxiety across the city continues to rise in regards to car thefts and carjackings.

"There is no one in this city that isn't at a point of complete frustration," he said.

"Like all of you, I am very grateful and relieved that the children are safe," Vasquez. "Please help us in reminding neighbors not to leave vehicles unattended while the engine is running, even during the winter months."